Patrick Freyne: Boy (14) forces his family to travel from Kerry to park for ‘historic’ day 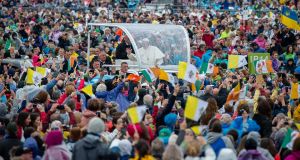 Pope Francis arrives at the Phoenix Park to celebrate mass. Photograph: Will Oliver/EPA

The Byrne family from Ballyduff, Co Kerry, are among the first to arrive at the Phoenix Park for the papal mass. Sitting close to the front of the altar on a check blanket beneath colourful rain splattered umbrellas, parents Enda and Suzanne and daughters Suzy and Grace are very clear why they are here.

“It’s his fault,” says Suzanne, pointing at her fourteen-year-old son, Jack, and they all laugh.

They tried to dissuade him. “We bribed him,” she says. “We offered him 500 quid. We said we’d go to the National Aquatic Centre instead.”

Jack pulls up his anorak to reveal a colourful pope t-shirt. The rest of the family are also mass-goers, just not so enthused about the papal variety.

Why did he want to come? “It mightn’t happen again,” says Jack. “It’s historic.”

And the family took his wishes seriously. “We planned this like a military operation,” says Suzanne, pointing out the umbrellas, blankets and huge bags of food. I want to ask Jack more about his youthful interest in the papacy, but I am hurried away by the press handlers (media are shepherded around all day in what are called, for some theological reason, “pods”). Is there anything they want to say before I leave?

“If you hear tell that they want altar servers we have three volunteers,” says Suzanne.

“And I’ll do the collection,” says Enda.

Singing in the rain

Many of the earliest arrivals are here to sing with various choir groups. “We were only a couple of weeks married when we joined the choir in Ashbourne and went to sing [for Pope John Paul II] in Drogheda, ” says Julie Flynn.

The rain is pelting down at this stage. Are they okay with singing in the rain? “There’ll be no rain,” says her husband Ciaran confidently. “The pope is going to get rid of all that rain. At twelve o’clock it’s going to switch off.”

Many of the older attendees saw the Pope in 1979. Matt Boylan is sitting on the folding stool he sat on during the last papal visit. He still has it?

“There’s a lot goes in the dump he doesn’t know about,” chuckles his wife Gail.

Matt was with the civil defence then and not all of his memories are concerned with holy things. He recalls how some makeshift galvanised iron toilets were knocked over and several people were covered in “you know what.”

He laughs. They’re drinking tea as rain splatters off their rain ponchos and they seem very happy about seeing “a lovely man.” Matt is also hoping that he will give a more direct response to the abuse scandals and to the Taoiseach’s speech the day before.

This is a recurring sentiment. Elizabeth Keane, here with the Ballyroan Choir, believes the religious orders who abused children and didn’t “pay redress, betrayed the basic message of Jesus of Nazareth.”

Her friend Louise Colgan agrees, but she also wants people to remember that “this is a very happy day. There’s not much written about the joy.”

Kate Gribben and her sixteen-year-old daughter Emily have come from Dromore in Co Down and they know all about the joy. “I feel very emotional,” says Kate. “I wouldn’t miss it for the world.”

Emily plans to be a filmmaker and to travel the world. Firstly, however, she wants to see the pope. She has two holy pictures in her hands. One is picture of St Alexandra, an Egyptian princess sentenced to death by her Christian-persecuting husband. The other is a “Sacred Heart of Jesus” image once owned by her great grandfather. Emily feels that having it here connects her to her ancestors. “It’s like they’re here with us,” she says, “like we’re all experiencing this.”

Mary Daniels and her sister Jackie Dunne are wearing white and green pope t-shirts. A friend was meant to come wearing an orange one, so they could look like an Irish flag, but she was sick and couldn’t come. “I’m so emotional being here today,” says Mary. “There’s an aura around the whole country... We can feel it. He’s the most important man to us.”

Are they worried about the rain? “Irish people never worry about the weather,” says Jackie. “If we did sure we’d do nothing.”

I interrupt Texas-based Brother Peter Maire McArdle while he’s in the middle of saying midday prayers with his breviary on his lap. “A priest has a grave responsibility to say his prayers,” he says.

But he doesn’t mind the interruption. “It’s an historic day for Ireland, ” he says.

Is he worried for the church? He is not. “In moments of crisis God renews and purifies the church and that’s what is happening right now”.”

Thirty-year-old Dundalk woman Ciara McParland and her fiancé Jason McKeown are here because McParland’s parents went to the Park in 1979 when they were engaged. “It’s a bit of history repeating itself,” she says.

Are they religious? “I’m a trained Catholic religion teacher,” says Ciara. “I don’t know if I’ve lost a sense of my Catholicism but I feel more secular. I’m more open to change than I feel the church is.”

“Loads of people had their chairs taken off them on the way in,” says Kathleen Fox, Patrick’s wife.

“We had our chairs taken off us,” chips in Dublin woman Geraldine Duffy. “I was very annoyed.”

But they’re sitting on chairs. “I blagged these ones,” she says.

How is this different from 1979? “None of my kids came to this,” says Geraldine.

Why? They’ve lost faith in the church, she says. “Because of the abuse.”

“We’re hoping that by us doing this, they will get the religion back,” says Geraldine’s sister Gloria Morgan.

“We want him to give them hope,” says Geraldine.

Patrick Quilligan asks what it would take to get on the front page of The Irish Times. I tell them a good soundbite would help. Geraldine has one: “We’re off to see the Pope, we hope he’ll give us hope.”