Initiative to take effect if the Eighth Amendment removed from Constitution 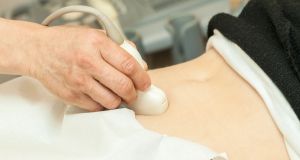 Proposed legislation will commit to the decriminalisation of women who procure an abortion, but retain a 14-year jail sentence for a person who carries out an abortion outside the scope of the law. File photograph: Getty Images

The Government will aim to prohibit late-term abortions except in the case of fatal foetal abnormalities, if the Eighth Amendment is removed from the Constitution.

Abortions which take place on the grounds of a threat to the life or health of the woman would not be permitted beyond viability, usually around the 23rd-24th week of pregnancy.

In those cases, where such a threat to the woman exists, the pregnancy would be ended by an early delivery.

Minister for Health Simon Harris is to bring the general scheme of a Bill to Cabinet on Tuesday outlining how it would legislate if the referendum to repeal Article 40.3.3 of the Constitution is passed.

The general scheme of the Bill is designed to give a detailed account of the intended legislation.

The proposed abortion legislation – which can only be tabled if the referendum to repeal the amendment is passed – will allow for terminations “without specific indication” up to 12 weeks. And it will introduce a waiting period of 48-72 hours between when a request for an abortion is made and the pill being administered by a medical professional.

After the 12th week of pregnancy, abortions will only be permitted when there is a threat to the life or threat “of serious harm” to the health of the mother, and in the cases of fatal foetal abnormalities.

The policy paper outlined by Government last month stated no gestational limits would apply in these cases. This led to criticism from anti-abortion campaigners, who claimed this would allow terminations to be provided up to full term in many cases.

The general scheme of the Bill will explicitly restrict late-term abortions by stating terminations “would not be lawful beyond viability”.

The viability of the foetus would be assessed and agreed by two doctors, one of whom would be an obstetrician or a gynaecologist. If viability is established and the pregnancy is to be ended on health grounds, then it will be done through early delivery.

Viability of a pregnancy will be determined by each individual’s circumstances but Dr Peter Boylan, chairman of the Institute of Obstetricians and Gynaecologists, has said doctors in Ireland tend to deliver from the 23rd week of pregnancy.

Government sources told The Irish Times: “Where a termination is carried out, the two doctors will be required to certify that there is a risk to the life, or of serious harm to the health, of the woman, that it is appropriate to carry out a termination to avert that risk and that the foetus has not reached viability.”

Such a prohibition does not exist in British law and is an effort by the Government to ensure any abortion regime here is restricted.

Gestational limits will not apply in the cases of fatal foetal abnormalities, when two doctors have determined the foetus will not be able to survive outside the womb.

The legislation is expected to be published after being considered at the Cabinet meeting. It will commit to the decriminalisation of women who procure an abortion, but retain a 14-year jail sentence for a person who carries out an abortion outside the scope of the law.

Mr Harris will also seek Cabinet approval this week to proceed with a series of measures on securing free access to contraception and improving sex education in schools.

The Bill to allow for a referendum will be considered by the Seanad this week.