Social media to play pivotal role in Save the 8th campaign 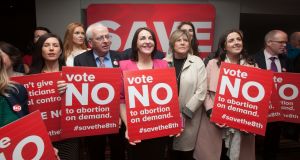 Campaigners during the official launch of the Save the 8th campaign in Dublin on Thursday. Photograph: Gareth Chaney Collins

A licence to kill – those were the words echoed by many of the speakers at the Save the 8th campaign launch on Thursday.

Contributor after contributor outlined their belief that abortion is the ending of a life, and those who support access to terminations were promoting the taking of a life.

This may have been the official launch of the campaign to retain the Eighth Amendment but it was clear work had been under way for quite some time.

Over 320,000 doors have been canvassed and a further 300,000 will be contacted before the end of the referendum campaign. Some 1,500 canvassers are on the campaign trail every week, the audience was told.

However, it is social media that will be its most significant asset during the referendum campaign. Of the €400,000 it intends to raise between now and the conclusion of the campaign, a “significant” portion of that will be focused on its online efforts.

It is something the Save the 8th campaign feels it has to do, spokesman John McGuirk says as he feels traditional media is not giving it a fair hearing.

The group is obviously conscious that those in favour of retaining the Eighth Amendment are often portrayed as being led by older, male voters. As part of its launch on Thursday, several young women were presented to the crowd outlining their opposition to abortion.

There were plenty of young children and babies at the event. Many politicians were also present.

However, one politician who was not present attracted the most attention and the biggest reaction. While Tánaiste Simon Coveney was taking Leaders’ Questions in the Dáil, his name was being bandied about the packed room in a Dublin hotel.

Coveney’s decision to support the proposition to repeal the Eighth Amendment and allow for access to terminations up to 12 weeks came two months after he outlined his opposition to the same measure.

The Tánaiste’s very public wrestle with his conscience has given the anti-abortion campaign the ammunition it desired.The group says his change in opinion highlights how politicians cannot be trusted on this issue.

And it is that line of attack and the ability to spread the message of distrust that will prove to be the biggest tool in the Save the 8th’s armour.