One Connemara publican says: ‘This change alone is not going to save the rural pub’ 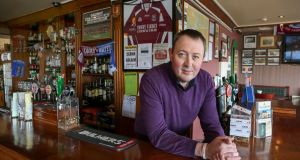 Michael Coyne at Tigh Chadhain in Connemara. The pub will not be opening on Good Friday. Photograph: Joe O’Shaughnessy

The gentle tap on the back door of a Good Friday is not something that Connemara publican Michael Coyne remembers as a child.

Nor does he ever recall customers staying over from Holy Thursday into the early hours, at the risk of being “found on” when pubs were closed the following day.

“My parents were glad to take Good Friday off, as one of the rare holidays during the year, and we had the day out in Galway or with relatives,” he says.

And so his pub and bistro, Tigh Chadhain, will continue that tradition this week.

Coyne’s Cill Chiaráin premises, which dates from 1892, is one of a number of hostelries in rural areas opting to remain closed on Friday, while other businesses may open for the first time.

Opinion is divided on the advantages because, as Coyne points out, “this change alone is not going to save the rural pub”.

Coyne has a Chinese slate floor that will receive a makeover, while other pubs may use it as a painting day, he says. “So it is not like we are putting the feet up, but it does give us the chance to get jobs done before the summer season.”

Over in Swinford, Co Mayo, Shane Campbell is proprietor of The White House, which has been in the family since 1897. It looks after its customers’ every need, as there is an undertaking business next door.

“Ah yes, there are a lot of lads who would like to become painters, or put wallpaper up in a pub on a Good Friday,” Campbell laughs. He took a straw poll with customers as he had an open mind about it all.

“The result was 74 per cent said to stay closed, and most said to enjoy the day off, so I will roll with that,” he says.

“To be honest, it is the pubs in cities and in tourist hotspots like Galway and Westport that are really going to benefit from this,” he says.

Day’s Bar on Inishbofin will open for visitors arriving for the weekend, and manager Adrian Herlihy says he is delighted.

PJ Flaherty of Tigh Joe Watty’s pub on the Aran island of Inis Mór will do likewise, and for very compelling reasons. His premises went “viral” for all the wrong reasons after a break-in on St Patrick’s Day this year, when taps were left running and he lost 15 kegs of beer.

He estimates total losses at almost €10,000, and so he is “delighted” to be expecting extra business later this week.

Vintners Federation of Ireland president-elect Padraic McGann will also open his family premises in the north Galway village of Monivea.

“Country pubs are in crisis, and so Good Friday is not going to break any records, but I have to pay tribute to Senator Billy Lawless for supporting the campaign for this change,” he says.

One Galway city pub which will definitely celebrate the occasion is the Blue Note, which was also involved in lobbying for Good Friday opening. Last year, it held a mock “lock in” to remember restrictions such as the Sunday “holy hour”, which was abolished 18 years ago this summer.

“We sold so many tickets for that event that we might do another ‘lock in’ for Good Friday,” its owner Malachy Duggan said.