Referendum Commission has no power over social media 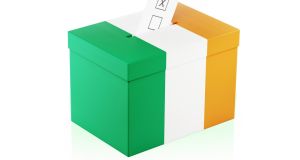 Every Irish citizen aged 18 or over is entitled to vote. It is vital to check the register now to ensure your voice will be heard.

The politicians have debated, the Citizens Assembly has had its discussions, the Oireachtas Committee has heard from various witnesses. Now, the decision on the proposal to give the Oireachtas the power to make law to regulate the termination of pregnancy will be made by the people of Ireland on May 25th.

To be more precise, the decision will be made by the people of Ireland who are registered to vote. Right now that excludes many eligible voters. There are those who are eligible to vote in the referendum but either are not on the electoral register, or are registered at the wrong address.

It is hard to be precise about the numbers who are not registered and who will not be able to exercise their right to vote as things stand. Young people have a particularly high propensity to be unregistered: they move house more often, they are often first registered at their parents’ home and then move out.

But the phenomenon affects all age groups and every county in Ireland.

The good news is that there is time to put this right. At the website checktheregister.ie, if you enter the province in which you live, your local authority area, and your street address or Eircode, you can find out instantly whether you are registered. If you are not, that site gives you links to forms that can be downloaded, completed, and returned to your local authority office. If you do this before the May 8th deadline, you will then be able to exercise your right to vote in the referendum. Please don’t wait until then: do it now.

A Referendum Commission has been established for the forthcoming referendum. Our job over the coming weeks will be to explain what the referendum proposal means, to make sure people know there is a referendum taking place, and to encourage people to vote.

As part of this, we will shortly be running an advertising campaign urging people to check the register and ensure they can vote. Later in the campaign we will be publishing a full explanation of the referendum proposal on our website, and in a guide booklet to be delivered to 2.2 million homes across the country.

There are some misconceptions as to the commission’s role. We provide facts in an unbiased way. We have no role in giving the arguments on both sides of the debate. We do not sit in judgment on what each side in the campaign says. We give a neutral and accurate explanation of the referendum proposal: we don’t give a critique of the campaigns.

Others can and will make arguments about the implications of a Yes vote or of a No vote. The public debate on these things should have the effect of showing voters that these issues are important, and that they should vote.

The No and Yes arguments really engage voters. If there is disagreement over the points made by each side, our neutral explanation of the proposal will be there, permanently available, for all voters to read.

The law does not give us any role in the regulation or oversight of campaign funding, spending or advertising. We have already received some queries asking us for our view on how Facebook and other social media platforms may be used by the various campaigns. We have no role in this regard. Our role is to encourage people to register to vote, to provide neutral and unbiased information on the referendum proposal, and then to encourage people to use their vote in the referendum.

But the immediate issue for all potential voters now is to ensure they can vote on the day. Every Irish citizen aged 18 or over on polling day is entitled to vote. A referendum is an occasion when a decision is made not by the Government, or by the Houses of the Oireachtas or by the courts, but by the people who vote. It is very important to check the register now to ensure your voice will be heard.

We think the intensity of the debate in the coming weeks will demonstrate that the issue to be decided is very important to very many people. Our Constitution is a founding document which underpins our society. The Constitution belongs to us, the people of Ireland, and only we can decide whether or not to change it. Don’t let others make that decision for you. Visit checktheregister.ie now.

Judge Isobel Kennedy is chair of the Referendum Commission

1 Steve Coogan: ‘Come Out, Ye Black and Tans is two fingers to the British’
2 Ben Affleck: ‘It took me a long time to admit I am an alcoholic’
3 Parties to continue talks with Sinn Féin despite Drew Harris’s IRA comments
4 Drug dealer loses codes for €53.6m bitcoin accounts
5 L’Arche founder implicated in sexual abuse of women
Real news has value SUBSCRIBE