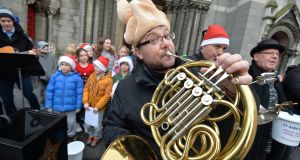 Members of the Church of Ireland in Dublin are angered that a barrier linked to Luas on Dawson Street remains outside St Ann’s Church despite assurances it would be removed ahead of its ‘Black Santa’ Christmas appeal.

Canon David Gillespie, vicar at St Ann’s, said he expected this year’s appeal to be “decimated” because of reduced footfall due to the obstruction.

He said he received assurances from various authorities that the barrier would be gone before the appeal began on Friday, and had been in contact Minister for Transport Shane Ross’ office about the matter.

The fundraiser, which brought in €45,000 last year, is one of the few in Ireland where all monies collected go directly to those in need.

Archbishop Michael Jackson said it was “very important for us in the Church of Ireland as an opportunity for people to show generosity.”

However, this year’s appeal was “almost inacessible and invisible from across the street”. Access had become “an obstacle course,” he said.

Archbishop Jackson handed in a letter at the Kildare Street entrance to Leinster House for Mr Ross, appealing to him to intervene.

He wrote that the ‘Black Santa’ appeal raised money for community based charities that had “come to rely on the contributions from St Ann’s”.

This year “we are greatly concerned that access to the area in front of St Ann’s...is rendered almost impossible because of barriers which have been erected as part of the Luas works,” he said.

Canon Gillespie was “directly in touch with your office. I appeal directly to you to review the decision and to facilitate the people of Dublin in making their contribution by making access to the area in front of St Ann’s much easier than it is at present,” the Archbishop added.

The ‘Black Santa’ appeal, so called because of the long black cloaks worn by the clergy taking part, is in its 16th year at St Ann’s and has raised more than €500,000 for local causes.

The annual sit out will continue from 10am until 6pm each day up to Christmas Eve with Canon Gillespie, clerical colleagues, and teams of volunteers.