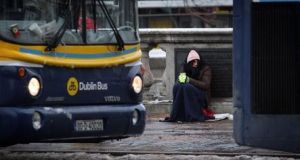 A homeless person begs in Dublin city centre, above. On Thursday night, co-founder of Home Sweet Home, trade unionist Brendan Ogle, told The Irish Times the group had identified a Nama-managed property in the city centre and planned to stage a “citizens’ intervention in the homelessness crisis”. File photograph: Getty Images

About 100 “concerned citizens”, including high-profile personalities, have gathered in Dublin on Thursday night to take over Apollo House, a Nama property, in order to accommodate the homeless.

Co-founder of Home Sweet Home, trade unionist Brendan Ogle, told The Irish Times Thursday night the group had identified a Nama-managed property in the city centre and planned to stage a “citizens’ intervention in the homelessness crisis”.

“We are going to go in, turn on the electricity, turn on the water, turn on the heating and gather up as many homeless people as need a roof over their head. This has been very well planned and the building is safe.

Describing the property in the south inner-city as “lying empty and belonging to us, the Irish people”, he said the “intervention” had two “key components” - a practical one to provide “safe, warm accommodation”, and to “focus national and international attention on the unacceptability of buildings lying empty while people are homeless”.

“We want to appeal to the goodwill of the powers-that-be and to say, ‘Let’s pull together as a nation and end homelessness. There is no need for it’.”

The most recent rough-sleeper count in Dublin, conducted on November 22nd, found 142 people sleeping out on the streets and in parks.

This represented 40 per cent increase since the spring count and a more than 50 per cent rise since last winter.

The count also found 77 people sleeping on roll-out mats in the Merchants Quay night cafe, bringing the total number of adults unable to access an emergency bed to 219.

Last Friday, December 9th, the Dublin Region Homeless Executive opened two new emergency bed hostels for rough sleepers. The opening of a third, Carmans Hall, which was due to open in Dublin 8, has been blocked following a court injunction sought by local groups.

In the week November 21st-27th, there were 1,023 families (including 2,110 children) homeless in Dublin, accommodated in emergency accommodation.