Christmas markets: A cherished tradition in many European cities 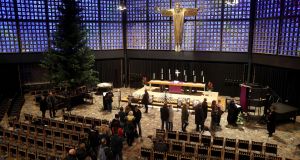 People line up to sign a book of condolonces at the Kaiser Wilhelm Memorial Church near to the area where a lorry drove through a Christmas market in Berlin, Germany. Photograph: Sean Gallup/Getty Images 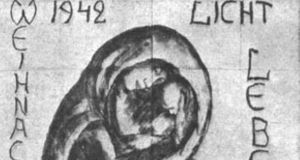 Kurt Reuber was serving at Stalingrad in Christmas 1942 when the German army surrendered. Hoping to comfort the demoralised soldiers, he made a sketch of the Madonna on the back of a discarded map.

Christmas markets are busy, cheerful places – a cherished tradition in many European cities. The timber cabins with their bright lights and seasonal goodies create a festival atmosphere unique to Christmas. In Berlin, there is a Christmas market with a difference located on the Kurfürstendamm in the centre of the Breitscheidplatz. This special place is also the site of a ruined Lutheran church bearing the unmistakable scars of a world at war. The Kaiser Wilhelm Memorial Church built in the 1890s was destroyed by bombs in 1943 and parts of the building have been rescued and converted into a hall of remembrance. Photographs show this was once a magnificent building.

This Memorial Church promotes reconciliation with former enemies and has links to other places where the cost of war is remembered. One such place is the ruined 14th-century Coventry Cathedral which was destroyed by bombs in November 1940. When that happened the then Provost Richard Howard directed that the words of Jesus “Father forgive them” should be engraved near where the altar once stood. But he later changed his mind and directed that it should read simply “Father forgive” – an acknowledgement of a shared guilt. The Coventry link is represented in the Memorial Church by the famous Coventry Cross of Nails, a tradition that began in that ruined cathedral when a priest made a simple cross out of three hand-forged nails that had been used 600 years earlier in the construction of the roof.

The Memorial Church has links also with the Russia Orthodox Church. At Easter 1988 the Orthodox Church presented an icon cross as a sign of reconciliation “in remembrance of the victims of Nazism borne by our churches and peoples during the second World War and as a sign of peace on earth among those on whom his favour rests” – a reference to the message of the angels the night the Prince of Peace was born.

A charcoal sketch known as The Stalingrad Madonna is kept in the new church close by. It is the work of Dr Kurt Reuber, a clergyman and a medical doctor who, although an opponent of the Nazis, was drafted into the army as a surgeon. He was serving at Stalingrad in Christmas 1942 when the German army surrendered. Hoping to comfort the demoralised soldiers, he made a sketch of the Madonna on the back of a discarded map. With suffering and death everywhere, he produced the image of a mother wrapped in a cloak with her baby in her arms, her face a picture of peace and serenity.

Kurt Reuber managed to send his drawing home before being captured. In a letter to his wife he had the nativity in mind as he wrote: “See in the child, the first born of a new humanity, a child that, though born in pain, banishes all darkness and sorrow. Let it be a symbol of the life full of triumph and hope that we wish to live all the more intensely and openly after all the death we have seen, a life that is worth living only if it is as pure as light and warm with love.”

Kurt Reuber never made it home; he died in a Russian prison camp.

A happy Christmas market side by side with a ruined church, a memorial to broken lives, may seem worlds apart but this is reality. Life is a mixture of happiness and sadness, of triumph and tragedy, and on the margins of every excited crowd there will always be broken hearts, broken dreams and broken lives. The true celebration of Christmas is not of some transient happiness that may or may not last but of the profound truth of the Incarnation that Jesus, Emmanuel, is God with us in every circumstance of life, good or bad.

The poet and spiritual writer Kathleen Norris put it simply: “The Incarnation is the place where hope contends with fear.”

1 Eyewitness to Auschwitz: ‘We were held in the wagons like animals’
2 Chinese virus-hit city of Wuhan closes transport networks
3 Eating out in Dublin – the homeless way
4 Man who killed Jastine Valdez ‘looked possessed’ before shot by garda
5 Election 2020: Varadkar and Martin’s first TV debate set for Wednesday
Real news has value SUBSCRIBE