‘I was tortured’: Woman shares her migrant experience 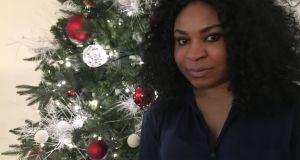 Chinonyerem Okeke at the Immigration Council of Ireland conference in the Morrisson Hotel in Dublin. Photograph: Peter Murtagh/The Irish Times

The dry legalistic and policy imperatives surrounding the debate about immigration reform were shattered when a young woman told her story on Friday morning at a conference organised by the Immigration Council of Ireland.

Speaking rapidly, Chinonyerem Okeke, known as Chino, seemed at times as though she was sprinting an Olympic 100 metres. She could not get her story out fast enough, such was its awfulness, its urgency and the obvious pain and emotion its telling involved for her.

She wanted it told and wanted it to be the last such story told. Before she ended, hers were not the only tears in the room.

The story she told was of what happened to her aged 15 and after.

At that time, she was living in her native Nigeria with her father, a bank official, and mother, a teacher, one of a family of six. But then her father lost his job and the family went from living in a large house to sharing a small, two bedroom house with a family of 10.

One day when she came home from school, her mother told her she was going to Ireland where would have a better life.

At the airport when she was leaving she met a person, an aunt, who told her from then on to refer to her at all times as her mother. The 15-year-old Chino didn’t really understand.

When she got to Ireland, she was fascinated at the greenery and how some people had blue eyes. After a while, she wondered about going to school; her aunt told her she was asking for too much.

But eventually, she did go to school, in Blanchardstown, where she made friends and life started being normal. . . until her aunt got her to start doing housework.

Soon life became an exhausting routine of up early and out to school, back at four to start cleaning the house and looking after everyone else. At school, she started to fall asleep such was her exhaustion.

If she complained to her aunt, she was beaten.

“The beatings continued,” she said. “I was tortured basically.”

One day at school, a teacher noticed she was crying and asked her what was wrong. Chino poured out her story; the head teacher was called, a social worker too.

Chino was urged to tell the gardaí but she feared for her family back in Nigeria: her aunt had threatened things would happen to them. Secretly, the school helped her.

“Every lunch break, they would buy me food and keep me going for a couple of months,” she explained.

One day during a beating, her head was injured. “It was normal. I got so used to beating,” she explained. She went to hospital.

After two years of such torture and then aged 17, Chino was taken into care and, with the help of Focus Ireland, she obtained accommodation and after care housing. But aged 18, she learned that her legal status in Ireland had expired, and she no longer had any legal basis for being in the country.

After the Leaving Cert, all her friends celebrated. Chino could not join in, she had nowhere to go.

“I remember walking around the shopping centre and everything was closed. The church was closed,” she said before breaking down, barely able to continue such was the memory of what should have been a joyous occasion but that for her, had been forever spoilt.

Stateless, status-less, Chino’s choices now that her secondary education was over, seemed to be non-existent.

“One day I went into Jimmy Chung, that place where you can eat all that you want. And I ate and then I left and I took a knife with me,” she said.

With anger, passion and through tears she described slashing at her wrists and walking around Dublin city centre bleeding, wanting to die.

“Tonight I am gonna cross the road without looking,” she shouted at her audience of migration professionals, lawyers and social workers, policy developers and advocates, silent save for those who were also showing their emotions.

But that night, she got a call to say that she had been accepted into the Trinity College access programme. For Chino this was “a sign from God”.

Eventually, her case was dealt with in a legal forum where Chino had representation, a solicitor there to make her case.

“She fought for me like a mother would fight for her child,” Chino remembers. “When I saw her, I said I want to be like her, to fight for the [other] Chinos.”

Chino is now 25; an articulate, passionate woman with a great mop of hair, a fighting spirit and a degree in law from Trinity. Next year, she will do a Masters at Imperial College in London.

Still crying, she ended her address to the perhaps 75 people at the conference by saying: “I want my story to be the last story ever told.”

“The worst thing that did not happen to me was death,” she said.

Launching the report, Child Migration Matters, for which the morning-long conference was held, Geoffrey Shannon said the key issue for child migrants was the failure for children to get early and rapid determination of their migration status. Only when this happened could they get access to vital services such as education and health.

“If we are committed as a society to treating all children equally, we are required to ensure that children can access services,” he said. “All children should be treated equally; well, the reality is that they are not.

“Every child should have that right to thrive and develop and that right is not vindicated for migrant children.”

The report, which includes policy analyses, care histories and recommendations, is available from the website of the Immigration Council of Ireland: immigrantcouncil.ie