Undocumented Brazilians ‘living in fear and limbo’ in Galway

‘These people are worse off than asylum seekers in direct provision,’ says doctor 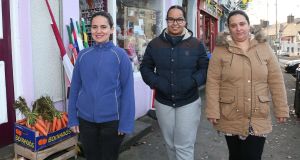 If Ana Maria Alves Caiado and Olivia Rocha dos Santos were given one surprise Christmas present, it would be the right to pay taxes in Ireland.

“We don’t want to take anything from anyone, we just want to give and to feel we belong here by contributing,”the Brazilians say.

The two women – one a young mother of two and one a recent Leaving Certificate student – are among dozens of undocumented migrants living in “limbo” in the south Galway community of Gort.

The town close to the Burren on the Galway-Clare border was once home to 1,000 Brazilians, many recruited by Sean Duffy’s meat plant in better economic times. When the factory closed in 2010 and work permits expired, there was no obligation on the employer to fly former staff home.

The Portuguese speakers had married, started families, put down roots. Among those who returned to south America, but then failed to settle, was champion hurler Leonardo Gomes. After Galway reached the All-Ireland hurling final, he packed up his hurl and returned to Gort.

The experience of other Brazilians seeking to stay in Ireland has not been easy. Undocumented migrants are forced to take insecure and often low-paid cash jobs to survive, and have no access to State supports and no right to medical cards.

They risk deportation if their application for status is not successful, as a report due to be published on Thursday outlines.

Joyce Correa da Silva (35), who came over with her husband 14 years ago when he was offered work with horses in Co Kildare, applied for documentation after she separated.

“I moved to Gort in 2009 with my son, who is now 16,” she explains. She waited two long years after she applied for residency and risked deportation.

“My son wrote begging letters to the Minister for Justice,” she says. “ I kept copies – they are so sad and so beautiful that I still have them all.” She has finally got her papers.

As Ms Alves Caiado, who continues to wait for hers, says, returning home with a child who might have fluent English and much weaker Portuguese, is not straightforward.

She has a two-year-old in Ireland and a 10-year-old son in Brazil. She cannot unite her family until she knows where she can call home.

The women have much in common with the Irish undocumented in North America, according to the Gort Justice for Undocumented group.

They bring new social capital to a rural town hit by emigration, the group points out. It says that the Government action plan on social inclusion has “failed” the highly valued community.

Gort Resource Centre co-ordinator Annie Rozario says that many of the estimated 400 Brazilians in Gort are “invisible” and living in fear.

“These people are worse off than if they were asylum seekers in direct provision,” says Dr Margaret Brehony, who conducted a survey for the Gort Justice for Undocumented group.

“Direct provision is very challenging, but undocumented migrants outside that system have neither shelter, nor the right to shelter or food.”

Hurler Gomes is due to turn on the lights for a Christmas “tree of hope” for his compatriots when the justice group publishes preliminary findings of Dr Brehony’s survey in Gort on Thursday evening.