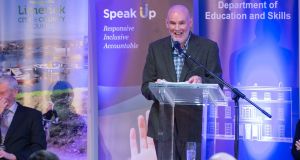 Fr Pat Hogan: “The poorer communities in Limerick can be enslaved and entangled by those in the drug trade.” Photograph: Cathal Noonan/True Media

Standing before Minister for Housing Simon Coveney, Fr Pat Hogan, who retired last year as parish priest of Southill in Limerick after nearly a decade, remembered a Canadian psychologist coming to the parish.

The Canadian came during the height of the battle between gangland criminals for control of the city’s drugs trade, believing that Southill offered a laboratory to study the effects of crime on children.

It surpassed his worst expectations. “The only place he ever saw children as damaged as this was in the Gaza Strip, ” Fr Hogan said yesterday, when he took the microphone at a meeting in Limerick.

“During my first year in Southill four young men were murdered. That was the Southill I moved into 10 years ago. Many others were murdered and we had many funerals.

“What always amazed me was the amount of anniversaries of young people who were killed, murdered. Thankfully, we have had none of that for some years.”

Fr Hogan’s contribution, one that quietened the room, came at the launch of a report by Coveney detailing the progress that has been made in regenerating districts such as Southill.

This year, €30 million will be spent. In all, €260 million has been spent on new homes and social improvements since 2008. The latest report laid out “the next steps that will be taken”.

Welcoming the changes that have been made, however, Fr Hogan said the communities in Limerick that had been affected by poverty, unemployment and crime for decades were still bearing scars that will take years to heal.

“I’m sorry for reminding you of the dark days, but it’s important to do so, for those who don’t know or for those who are quick to forget where we have come from or maybe those of you who have never been here,”he said.

Having interrupted the fanfare, the priest reminded everyone that the memories of grim days were never far away, even though they have been pushed into the background by death and jail sentences.

“Every day was a crisis. There was absolute panic with people being burned out. I knew all those families. It didn’t matter whether you were pushing a walking frame or in a cot, your house could be targeted, and many were targeted,” Fr Hogan said.

“Imagine – and this did happen – someone driving a car through your garden wall and setting it on fire just outside your sittingroom window. There was a craziness and a madness in it all; there was no sparing of anybody.”

It was only when the murders stopped as the Garda Síochána toppled the city’s ruling drugs gangs that he suddenly realised “how quickly I had got used to gunfire”, Fr Hogan told the minister.

“It was anarchy . . . having to take children out from the schoolyard because of shootings, and the sound of gunfire; having to check the streets to make sure it was safe for the children to go home; families sleeping on the landing because of shots coming through their windows . . . it happened so much.”

Still living in Southill, he remembers how the violence reached a new low in 2006 when a petrol bomb was thrown into a car in Moyross containing Gavan Murray (4) and his sister Millie (6), leaving them scarred for life.

“I think the children [of the regeneration areas] paid an enormous price for the violence and the dysfunction. We had no idea what was actually going on in many children’s lives, what was being done to them and what crimes they were being involved in.”

So far, the regeneration project had done much good work, but “the grim tale of poverty still exists”, he said. The stories of the drugs battle a decade ago are “yesterday’s headlines, but we don’t want them to be tomorrow’s headlines”.

Despite the efforts of Regeneration Limerick officials to engage with the community, people had been left with many broken promises, and many challenges remain.

“The poorer communities in Limerick can be enslaved and entangled by those in the drug trade, and you will never [completely] root them out and they forever need to be challenged. It’s not just a Garda [response], every agency must come at them,” he said.

“We built Ballinacurra Weston, Southill, Moyross back in the 1960s and we planned ourselves into trouble. So when it comes to planning we have to make sure we get it right,” he said.

In April 2007 the first of several regeneration reports, the Fitzgerald report, was published to great acclaim. It recommended the regeneration of Southill, Moyross, St Mary’s Park and Ballinacurra Weston over a five-year period as well as the demolition of more than 3,000 substandard council homes.

In 2010, the plan was downgraded and the government pledged €337million to 2014. However, in the intervening period due to the economic crash, the project was further downgraded. Limerick City and County chief executive, Conn Murray said the initial Regeneration Limerick masterplans had "been proven on many occasions to be unrealistic"

"As long as we attempt to measure ourselves against that version of the past we simply will continue to fail. The only plan against which we can be measured is the Framework that is here and being discussed today," he said.

Since 2008, about 1,000 homes have been demolished. However, just 110 new ones have been built, while 131 more are are under construction. Some 273 homes are also being designed, while another 50 have been given preliminary approval.

Promising up to €30 million each year for more new homes, Coveney said: “I’m here to listen to the communities. We have seen extraordinary progress to date.”

Responding to the words of Fr Hogan, he said: “We have learned from the lessons of the past; we change and we adapt. Just like Fr Pat, many children still carry the scars of planning mistakes.This is more than just talk.”