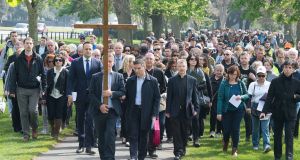 Taoiseach Leo Varadkar and Archbishop of Dublin Diarmuid Martin taking part in the annual Way of The Cross procession from the Wellington monument to the Papal Cross in the Phoenix Park on Good Friday. Photograph: Dave Meehan

Archbishop of Dublin Diarmuid Martin lamented the “harshness” of Irish Catholicism in the past while speaking at a ‘Way of the Cross’ event on Friday.

He asked those gathered at the event in Dublin’s Phoenix Park how it was that the church and its institutions “could at various times in history have been so judgmental and treated broken people who were entrusted to its care with such harshness.

“Was there something off-beam deeply embedded in the way Irish Catholicism developed?” he asked.

“There was a harshness in the confessional dealing with sinners. It was a harshness carried out in the name of a Jesus whose characteristic was being merciful and welcoming to sinners.”

Taoiseach Leo Varadkar was among hundreds of participants, who were led by the archbishop in a procession from the Wellington monument to the Papal Cross.

During his reflection, Dr Martin highlighted the “many groupings who were misjudged and suffered in institutions which were founded to provide the vulnerable with care”.

He recalled the words of Pope Francis delivered at the beginning of his Mass the Papal Cross site last August: “We ask forgiveness for the cases of abuse in Ireland, the abuse of power, the abuse of conscience and sexual abuse on the part of representatives of the Church.

“In a special way, we ask forgiveness for all those abuses that took place in different kinds of institutions directed by men and women religious and other members of the Church. We also ask forgiveness for cases in which many minors were exploited for their labour,” he said.

“We ask forgiveness for some members of the hierarchy who took no responsibility for these painful situations and kept silent.

It began at St Mary’s Church of Ireland Cathedral with a stop for prayers at Arthur’s Quay where youth mental health service Jigsaw is based, and at Poor Man’s Kilkee in recognition of the work of the Samaritans.

Included on the route was the Bedford Row Family Project, which engages with families of prisoners; Thomas Street, where the dead were remember; Br Russell House at Gerald Griffin Street, in recognition of work for the homeless and St John’s Hospital to honour the sick.

Bishop Leahy said the fact “that we are linking our two cathedrals is very pertinent in a week in which the world has been shocked by the fire at Notre Dame”.

“It is one of the great cathedrals of the world but we have our own great cathedrals here and, in fact, St Mary’s Cathedral is just five years younger than Notre Dame and the oldest building in Limerick still in use today.”

Tonight in Dublin Archbishop Martin and and Church of Ireland Archbishop of Dublin Michael Jackson once again led a silent Good Friday walk through the city centre streets carrying a Taizé Cross from the Church of Ireland Christ Church Cathedral to the Catholic St Mary’s Pro-Cathedral.

The Cross represents the ecumenical monastic community of Taizé in France.