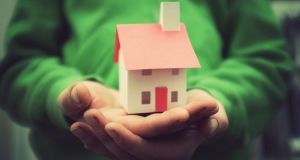 A new OCO report details that children as young as five have made repeated attempts to run away from family hubs. Photograph:© Catherine MacBride 2013

Heartbreaking testimonies from children about life in family hubs, published on Thursday by the Ombudsman for Children’s Office (OCO), are almost identical to those heard two years ago from children living in other institutions.

Those stories, published in a Department of Justice report, were from children in the direct provision system. They described “not liking anything” about where they lived, and spoke about rules being “not fair” and issues such as not being able to have friends visit them.

The authors of the 2017 report noted: “The main message that emerges from the data is that, on the whole, children and young people living in direct provision are dissatisfied with the system and say that their personal wellbeing, family life, private life and social life is adversely affected by long stays in the direct provision centres.”

It remains Government policy to accommodate asylum seekers in direct provision centres, which are currently home to 1,778 children, according to the most recent figures published, from last October.

The family hub model began in March 2017 when the Respond housing association opened the first facility, which had capacity for 41 families, on the site of a former Magdalene laundry at High Park in Drumcondra, Dublin 9.

Respond had brought the concept to the Government in late 2016, promising a preferable alternative to housing people who needed emergency accommodation in hotels and B&Bs.

Rather than homeless families being scattered across the city in commercial hotels, here they could access focused on-site supports, as well as cooking and laundry facilities.

Two years on and there are 26 family hubs – 22 in Dublin and one each in counties Cork, Limerick, Louth and Kildare. These have capacity for 600 families. Dublin’s hubs house 781 children, Limerick’s is home for 96 children and there are 34 children in the Western Road hub in Cork. A figure for the Co Louth facility was not available yesterday.

Though Department of Housing policy originally stated that families would spend three to six months in a hub before being housed, some have been in these institutions for more than a year.

Many had spent long periods in hotels or B&Bs beforehand, having lost their homes prior to that. The children involved have, in many cases, already experienced significant trauma related to insecure housing.

It is no surprise, then, that the OCO report details that children as young as five have made repeated attempts to run away from the family hubs in which they live.

Niall (5) tried to sneak out a window and previously tried to jump out another. Darragh (5) tried to run away from a hub and frequently told his parents he was “packing his clothes and leaving”.

“He asked the OCO staff if they had a house, and when he was told that they did, he stated: ‘That is not fair.’ Several children echoed this sense of unfairness and injustice and struggled to understand why they did not have a house to live in,” the report says.

Hannah was one of several children quoted as describing the hub as “like a children’s jail”. Others said: “It feels like we are in a cage”, “It’s like a prison – it’s just horrible”or “I feel trapped”.

Ringing clear though all these testimonies is the deep upset, frustration, sadness, confusion, hurt and anger of already vulnerable children – some very young – whose whole worlds are being shaped by where they are forced to live for long periods.

It is worth noting there are neither national standards for nor independent inspections of family hubs. Some are run by housing associations, some by commercial contractors for profit. And more are planned.

When former minister for housing Simon Coveney pledged to end the use of hotels and B&Bs for homeless families by July 2017, there was hope that those in need of accommodation would be placed in homes.