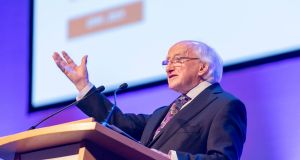 President Michael D Higgins has praised the work of the Society of St Vincent de Paul which he described as an “exceptional network of solidarity” with poorer people in Ireland.

Mr Higgins addressed more than 1,000 volunteers for the SVP in the Convention Centre Dublin to mark the 175th anniversary of the society. It is one of the largest gatherings of SVP volunteers in the history of the organisation.

He told those involved that SVP volunteers made a difference “each and every day” and did so by building relationships of “friendship, trust and confidentiality”.

The society had helped people through the Great Famine, two World Wars, the War of Independence and the Civil War along with multiple economic recessions, the President pointed out.

He said volunteers had lived up to the philosophy of the founder Frédéric Ozanam who said: “Help honours, when to the bread that nourishes, it adds the visit that consoles, the advice that enlightens, the friendly shake of the hand that lifts up the sinking courage; when it treats the poor man with respect not only as an equal but as a superior, since he is suffering what perhaps we are incapable of suffering.”

The President pointed out the importance of home visits at a time when so many people are reverting to laptops, tablets and phones.

“Despite all of the technological advances, human contact is something that defines us, be it through conversations, face to face interactions, simply taking the time to have a chat,” he said.

“When a person is at their lowest and may be in despair, this human contact is more important than ever.

“I know that home visitation is at the core of your work and that is a core strength of the Society of St Vincent de Paul. Your visiting people in their homes, your conversation with them, your listening to them, your being with them is precious and, most importantly, you give them time.”

SVP national president Kieran Stafford said there were still 800,000 living below the poverty line in Ireland including 100,000 people at work.

“Sadly today we still see poverty in many different situations and circumstances,” he said.

“We know and meet the people behind the figures every week bringing friendship and support.”

Archbishop of Dublin Diarmuid Martin praised the society’s advocacy on behalf of the poor in Ireland.

He said that advocacy was informed by the work on the ground of the society.

He added: “Your advocacy attains its particular credibility from the work of direct contact with the realities of poverty that is the true mark of the society. That is what impresses people; that is what motivates their generosity.”

Archbishop Martin said there was a “correct sensitivity” to using the term “the poor”.

He added: “I personally would prefer to use the term not just ‘people living in poverty’, but people who ‘long to break out from poverty’.”