Archbishop had ‘no prior knowledge’ of Vatican bar on McAleese 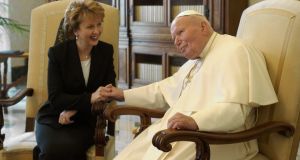 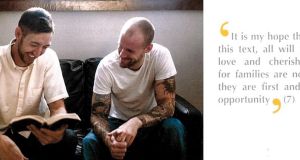 One of the images deleted from the World Meeting of Families 2018 booklet in its latest iteration.

Archbishop of Dublin Diarmuid Martin has said neither he nor his office were consulted by the Vatican prior to former President Mary McAleese being barred from taking part in a conference.

The event to mark International Women’s Day next month has been moved from the Vatican to another venue inRome after Mrs McAleese and two other speakers were refused permission to take part by Cardinal Kevin Farrell, prefect of the Dicastery for the Laity, Family and Life.

In a short statement on Friday afternoon Archbishop Martin said the first he heard about the decision “ was from Mrs Mc Aleese herself”.

He also said he had consistently noted that the World Meeting of Families (WMoF2018), due to take place in Dublin in August, “will be an inclusive event, open to all families and family members”.

His statement follows the disclosure earlier this week that pictures of same sex couples in a preparatory booklet for WMoF2018 distributed before Christmas had been removed in a replacement booklet circulated last month.

The Association of Catholic Priests (ACP), which represents over a third of Ireland’s priests, said in a statement that, where LGBT people were concerned, “the crude nature of their effective exclusion from the WMoF is embarrassing in the extreme”.

It had “significantly damaged the recent tentative efforts by Pope Francis and others to welcome back and encourage LGBT Catholics and to begin the process of undoing the insensitive treatment they have received in the past,” it said.

“Equally embarrassing”, it said, was “the effort to silence the voice of those who seek to convince our Church that women ‘have the expertise, skills and gifts to play a full leadership role in the Church’ as is also the implied dismissal of Mary McAleese.”

Both decisions were “clearly part of the fall-out from the present struggle in our Church ­ between those who support the reform programme of Pope Francis and those who seek to block it,” it said.

Meanwhile, there has been a call on the Government to withhold state assistance to WMoF2018 and a visit by Pope Francis to Ireland until assurances are received from organisers “that the event will welcome and include families headed by LGBT couples”.

The liberal Catholic We Are Church Ireland group said “such assurances are necessary in view of the removal of images and text relating to LGBT people from the WMoF2018 brochures”.

We Are Church Ireland spokesman Brendan Butler said: “The Government should not use Irish taxpayers’ money to fund any organisation that discriminates against LBGT families.”

He also described the barring of Mrs McAleese as “a very sinister” development. “Mary McAleese is an incredible woman with a backgroud in canon and civil law and it is shocking that she should be treated in this way,” he said.

The communications office at WMoF2018 has not responded to requests for comment.

The Women’s Ordination Worldwide (WOW) group noted, following the Vatican’s barring of Mary McAleese, how “Pope Francis has called repeatedly for fearless dialogue in the church. Yet, within the Vatican bureaucracy silencing and policing of women’s voices continues to be the status quo.”

Mrs McAleese, it said, was “known as an outspoken advocate for women’s ordination and LGBT rights.” WOW executive director Kate McElwee said that “while this turn of events is unfortunate, perhaps it is an opportunity to bring the Vatican’s role in the structural and spiritual oppression of women into this year’s discussion.”

DignityUSA, an organisation of Catholics committed to full inclusion of LGBTQI people in church and society, responded “with dismay” to reports that images of same-sex couples has been removed from a preparatory booklet for WMoF 2018 .

It was “a tragic denial of reality that increases the sense of unwelcome for LGBTQI people and our families in our church,” the group said in a statement.

DignityUSA executive director Marianne Duddy-Burke said removal of the photographs represented “an alarming and sad setback.” Having the pictures “deliberately deleted and replaced with photos deemed more ‘acceptable’ is really hurtful,” she said.

She, her spouse, their two adopted children and 22 other people representing LGBTQI families, attended the last WMoF2015 in Philadelphia which was attended by Pope Francis.

Noting that Bishop Brendan Leahy of Limerick and Archbishop Martin both indicated they wanted the WMofF 2018 to be open to all families, including same-sex couples and their children, she said “it seems that the goodwill of the local hosts has been overshadowed by doctrinal orthodoxy in a way that threatens to increase the alienation felt by so many.”

She called on Archbishop Martin and other Irish Catholic leaders “to stand up for all of God’s families, and make every effort to restore the photos of same-sex couples to the conference’s resource materials.”

Meanwhile the Association of Catholics in Ireland have inserted an addition to the Prayers of the Faithful for weekend Masses .

It reads: “We pray for those who feel excluded, neglected and isolated within our church. We pray that they be strengthened and comforted in their lives and that they be reassured that ours is a just Father who bestows his love on all his children equally.”

1 How one couple’s weekend away resulted in 30 Covid-19 cases
2 Taoiseach tells TD to ‘cop on’ over criticism of contact tracers asking about pubs
3 Miriam Lord: Government’s latest comedy of errors offers little to laugh about
4 US presidential debate: who won, was it any good, were there any surprises?
5 Trump urges Proud Boys to ‘stand down’ after debate criticism
Real news has value SUBSCRIBE