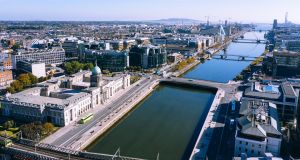 The man, believed to be from west Dublin, was known to homeless services for some time and was found by volunteers who went to liaise with him. Photograph: iStock

A young homeless man has been found dead in central Dublin.

The 19-year-old, who had been sleeping rough and at times living out of a car, was found inside the vehicle on a laneway off Parnell Street on Thursday afternoon.

The man, believed to be from west Dublin, was known to homeless services for some time and was found by volunteers who went to liaise with him.

Gardaí and emergency services were notified and the scene was cordoned off to allow for forensic and technical examinations.

Cllr Christy Burke offered his sympathies to the man’s family and urged newly appointed Minister for Housing Darragh O’Brien to address the “uncontrollable situation” of homelessness.

“How many more lives have to be lost before this becomes a priority? For the past two days there have been no beds in the city for men,” he said.

“The homeless are being forgotten about again. It’s just horrendous to think about what this young man went through and what his family now face.”

Dublin City Council said it was aware of the incident and was liaising with the authorities. The council said that as of 4pm on Thursday there are 20 beds available to homeless men in the city.