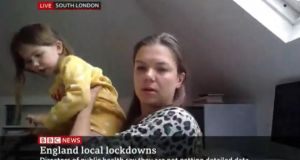 Dr Clare Wenham, assistant professor of global health policy at the LSE, on the BBC, being interrupted by her daughter

In the past three months we have all become “BBC Dad”. No doubt you’ll fondly remember the South Korean political expert Robert Kelly, whose adorable children Marion and James gatecrashed his BBC news interview in 2017. We all laughed at the time of course, but during lockdown it didn’t seem quite so funny as we kept little limbs out of view on Skype, muted toddler tantrums on Zoom and homeschooled between work phone calls.

Resistance is futile: kids don’t care one jot about protocol or office politics or work hierarchies when they want their parents’ attention. They certainly don’t care about a potential TV audience of millions when they want a biscuit, or a place to stick a unicorn picture.

Barely breaking rhythm, Wenham lifted her daughter out of the way and remained a consummate pro. It’s a skill set that almost every working parent has had to master since March, this juggle of professionalism and parental patience

This week children invaded on-air interviews twice in quick succession. On the BBC again, Dr Clare Wenham, an assistant professor of global health policy at the London School of Economics, had been discussing local lockdowns when her young daughter, Scarlett, began pottering about in the background of her Zoom call. Barely breaking rhythm, Wenham did a stellar job of lifting her daughter out of the way and remaining a consummate pro. It’s a skill set that almost every working parent has had to master since March, this juggle of professionalism and parental patience.

Somewhat endearingly, and perhaps mindful that he had a potential viral moment on his hands, the BBC journalist who was interviewing Wenham, Christian Fraser, handled her predicament empathetically. He actively involved the little girl in the interview, telling her: “Scarlett, I think it looks best on the lower shelf, and it’s a lovely unicorn.” The item continued, and the sky did not fall in.

Dr Clare Wenham, we understand your struggles of working from home and looking after children 😂https://t.co/vXb15EQatL pic.twitter.com/4f3PODtJWA

Things were slightly different a little later in the day on Sky News. The station’s foreign-affairs editor, Deborah Haynes, found her own Zoom interview about Hong Kong’s work laws interrupted by her young child. Flinging open the door with nary a warning, Haynes’s unnamed son took advantage of the moment by asking for two biscuits. In this instance the programme’s anchor, Mark Austin, cut the interview, and a very apologetic Haynes, short.

“Yes, okay, well, we will leave Deborah Haynes in full flow there with some family duties, but that’s what happens during lockdown and trying to report during lockdown,” Austin said, not looking particularly endeared at all. In fact, his was the sort of unimpressed reaction best reserved for serious on-air gaffes, like marauding mooners in the background.

Online commenters praised her son’s snack-negotiating skills – really, he should have asked for a PlayStation – yet were somewhat less impressed with Haynes’s interview unceremoniously being cut short for the same reason.

Far from displaying coolheaded elan, most of us are merely muddling through and hoping we don’t entirely mess up our new portfolio careers as cook, cleaner, caretaker, teacher and worker

In the new normal, juggling professional and parental duties on a minute-by-minute basis are simply the way of things; it’s just that, for most parents, they happen out of public view. Austin leaving his colleague “in full flow there with some family duties” suggests a lack of understanding of that reality for so many parents. Whether it was Austin or his producers who made the call, it appeared to confirm what many of us working from home might fear: that, somehow, alluding during office hours to being a parent is embarrassing.

There’s no such thing as “leaving” parents to family duties these days. If you are working from home the two spheres are by now fully intertwined. Where one broadcaster acknowledged this as a part of everyday life, the other’s condescending tone seemed to reinforce the idea that, when it comes to the professionalism and the domestic, never the twain shall, or should, meet.

The reality for most women trying to juggle parenting, homeschooling and a career is much bleaker than these two videos suggest. Far from displaying the coolheaded elan of Haynes or Wenham, most of us are merely muddling through and hoping that we don’t entirely mess up our new portfolio careers as cook, cleaner, caretaker, teacher and worker. Thank God none of it is televised.

Vicky Phelan: ‘I hated being a mother – I would have gladly walked away from it’
4