An apparition or a magic lantern: What happened at Knock 140 years ago? 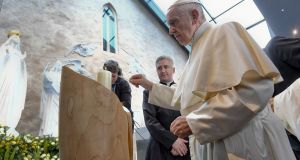 Pope Francis lights a candle at the Knock Shrine in Co Mayo last year. It is 140 years today since 15 local people said they saw an apparition of Mary, St Joseph, St John the Evangelist, and a lamb in the village. Photograph: Ciro Fusco/AFP/Getty Images.

It was very wet that evening in Knock on August 21st, 1879, 140 years ago today, when 15 local people saw the apparition of Mary, St Joseph, St John the Evangelist, and a lamb standing on an altar before a cross, on the parish church’s gable wall.

It was a potato blight year in Mayo, one of the worst in the area since 1847 during the Famine.

First to see the vision at about 8pm were Mary Beirne (26) and Mary McLoughlin, housekeeper to Knock parish priest Archdeacon Bartholomew Cavanagh.

Beirne ran home to tell her parents and soon other locals were alerted. All stood staring at the silent vision on the gable wall for about two hours while reciting the rosary.

The following October Archbishop of Tuam John McHale set up an inquiry into the apparations. It was made up of three parish priests, including Archdeacon Cavanagh, and six curates. All 15 witnesses were interviewed and their testimony was found to be “trustworthy and satisfactory.” It found no explanation of the apparitions from natural causes and dismissed suggestions fraud may have been involved.

In her witness statement, Beirne identified St John the Evangelist in the apparition from “ a statue at the chapel of Lecanvey near Westport, Co Mayo”.

She said “it was this coincidence of figure and pose that made me surmise, for it is only an opinion, that the third figure was that of St John, the beloved disciple of Our Lord, but I am not in any way sure what saint or character the figure represented. I said, as I now expressed, that it was St John the Evangelist, and then all the others present said the same – said what I stated.”

On seeing the apparition McLoughlin first thought “that possibly the Archdeacon had been supplied with these beautiful figures from Dublin or somewhere else, and that he had said nothing about them; but had left them in the open air.”

After looking at the apparition for about half an hour she “went to the priest’s house and told what I had beheld, and spoke of the beautiful things that were to be seen at the gable of the chapel. I asked him or said, rather, it would be worth his while to go to witness them. He appeared to make nothing of what I said, and consequently he did not go.”

She “did not return to behold the visions again after that, remaining at my house. I saw the sight for fully an hour.”

The first recorded cure at Knock after the apparitions - a deaf person recovering their hearing - took place 12 days later. Over a year later, in October 1880, Archdeacon Cavanagh had recorded 637 cures.

A second inquiry into Knock was set up in 1935 by then Archbishop of Tuam Thomas Gilmartin. It examined the two surviving witnesses of the apparition living in Knock, Mary O’Connell (formerly Mary Beirne) then aged 86, as well as Patrick Byrne, then 71.

As part of this inquiry, a special tribunal was set-up by the Archbishop of New York to formally question John Curry, a Knock witness then living in New York.

He was five when the apparition took place, and had been lifted up by fellow witness Patrick Hill to see the vision.

In their final report the 1936 Commission, as it became known, stated that all witnesses examined were “upright” and their testimonies “satisfactory”. It added that Mary O’Connell (formerly Beirne), in particular, had left “a most favourable impression.”

Sceptics have argued that, as the apparitions did not move or speak during the entire period they were seen on the church’s gable wall, it was most likely they resulted from from “the projection of a magic lantern slide”, as former Trinity College Dublin professor of philosophy David Berman put it in a 1979 article. It also pointed to contradictions in witness statements.

He has also claimed that “there is a letter in the Tuam diocesan archive from a Michael McConnell from Belfast, who says that a friend of his called Constable McDermott, who had been stationed at Knock, had told him that the apparition had been produced by a magic lantern operated by a Protestant policeman stationed at Knock”.

Prof Berman continued that “this of, course, is hearsay,” as was a statement he had heard some years previously “from a senior member of the Irish judiciary, to the effect that a solicitor of his aquaintance told him that his grandfather hired a magic lantern to Archdeacon Cavanagh during the week in question”.

Scepticism aside, two popes have visited Knock and two saints: Pope St John Paul, who visited in 1979 to mark the centenary of the apparitions; St Teresa of Calcutta was there in June 1993, and Pope Francis visited last August.

This year marks the 140th anniversary of the apparitions and that will be marked on Wednesday at special ceremonies in Knock led by Archbishop of Tuam Michael Neary.

Included will be the unveiling of a Knock Village Model at Knock Museum, which details what the village looked like 140 years ago with miniatures of the old church of St John the Baptist, as it was then, as well as the houses the apparition witnesses lived in, schools of the time, people, animals, roads, pathways and farmland.

A new processional statue of Our Lady of Knock, hand carved at the Stuflesser Ortisei studios in northern Italy, will be dedicated. It was blessed in Rome by Pope Francis earlier this month at an audience attended by Knock parish priest Fr Richard Gibbons.