Project Ireland 2040: ‘The northwest is used to being forgotten’ 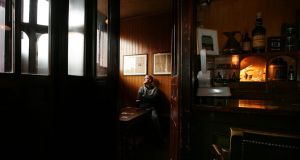 The political cavalcade has pulled out and the clouds remain bundled up over Knocknarea. The hype surrounding the announcement of the Government’s National Planning Framework in Sligo last Friday has passed, and opinion is divided locally as to whether Project Ireland 2040 will change anything.

Gerry Nicholson, who owns Sligo’s oldest pub, Thomas Connolly, is worried about the plan’s 22-year timescale: “It’s a long time until 2040. Things can change. Are we looking into a long tunnel, and where will it end?”

In 1891, his great grand uncle Thomas Connolly convinced Charles Stewart Parnell to visit the town and drop into the family pub. Hence he is, in principle, supportive of political visits.

Nicholson, a former Garda, approves of the Taoiseach and says youthful leaders such as Leo Varadkar and his Canadian and French counterparts Justin Trudeau and Emmanuel Macron have a bit of get up and go in them.

“I think Sligo needs a boost but maybe Sligo people sat down and waited for things to happen,” he says. “We haven’t used Yeats the way Stratford-upon-Avon has used Shakespeare.”

Nicholson also worries about the exodus of young people from the town. He has children studying in Dublin and Coleraine and a daughter attending Institute of Technology, Sligo. “A lot of people are leaving here. We need jobs, but to get them we need better access, broadband and housing.”

Allan Mulrooney does not wait for things to happen and is upbeat after attending Friday’s launch. The founder of Strandhill People’s Market moved home last April after spending about seven years working in Dublin, and has been recruited by IDA in the northwest.

“There was a lot of concern about Sligo not being included in the draft document,” says Mulrooney who used to have a 75 minute commute to work in Dublin. “Now I have a six minute commute, pretty much by a beach.”

He used to pay €1,350 in rent for a one-bedroom apartment in Dublin but now lives in a four-bedroom house near the sea with his wife and three week old baby at a cost of €900 a month.

“I feel there is definitely a sense of optimism after Friday,” he says. “I know there’s some cynicism, possibly some of it political, and some say there is a lack of detail in the plan, but it is for 22 years so that’s maybe to be expected.”

He believes the improvements in access announced in the plan will be a clincher for those who already know about the lifestyle perks of living in the region, such as being on a mountain 10 minutes after work.

David Kiely from Sligo Chamber of Commerce is “absolutely optimistic” in the wake of the latest announcements, especially the commitment to improve access on the N4 Dublin road and the N17 route to Knock airport. The planned Carrick-on-Shannon bypass and the Mulllingar to Longford motorway are also crucial, he says.

Kiely says regional difficulties are quickly noticed by potential foreign investors: “They usually fly into Dublin and then drive down and are scared by the sight of 30 crosses along the road,” referring to a campaign by a local action group highlighting 30 road deaths on a stretch between Collooney and Castlebaldwin.

He and the chamber are not worried about the timeframe, and he believes the commitments given will be enough to convince multi-nationals to look west.

When Mr Varadkar and his entourage arrived at IT Sligo on Friday they may have noticed a protest group highlighting the threat to Easkey post office which is due to close next month.

Richard Morrissey, a teacher who was among those protesting, did not take reassurance from Friday’s events: “It was a grand gesture and there was a lot of razzmatazz, but they are talking about 2040 and here we are in 2018 fighting for our post office which is vital economically and societally,” he says.

“I don’t want to sound negative but the northwest is used to being forgotten – the National Spatial Strategy fell on it’s arse because too many people were gnawing away at it. Maybe this is a genuine attempt to do something but it feels like we are being thrown a bone.”

The main points of Project Ireland 2040’s infrastructure plan can be read here.