Proposal features €2bn for Irish Rail for expansion of Dart to Maynooth, Drogheda 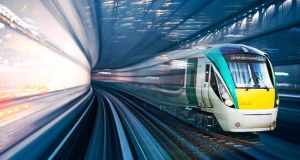 There is to be an investigation of the potential for high speed rail on the Dublin - Limerick Junction - Cork and Dublin - Belfast routes.

The Government’s new National Development Plan envisages €5.7 billion being spent on national road schemes, including the €0.9 billion Cork to Limerick motorway as well a further €4.5 billion on local and regional roads.

Returned to the agenda is a southeastern access route from Dublin Port designed to open up the Poolbeg Strategic Development Zone and link south wards towards the N11 and route through to the the M50. The new regional road is envisaged as a “light” version of the earlier eastern bypass plan which was shelved more than a decade ago.

Investments in cross-Border routes have also returned to the road building agenda including “support” for the Narrow Water Bridge across Carlingford Lough and the N5A5 road in the northwest.

Mention is made of post-Brexit supports including a North-West “multi-modal mobility hub”, about which initial details were scarce. The post-Brexit measures also included northwest greenways, a Carlingford Lough greenway and a greenway along the route of the defunct Ulster Canal.

The plan commits to the renewal of the next section of the Ulster Canal near Clones in Co Monaghan.

In terms of public transport, the plan proposes investment of €2.4 billion in the “Bus Connects” programme for the State’s cities.

There is to be an investigation of the potential for high speed rail on the Dublin - Limerick Junction - Cork and Dublin - Belfast routes.

Some €2 billion is to be provided to Irish Rail for the renewal and expansion of Dart services to Maynooth and Drogheda.

A big feature of the Dart plan is to be the immediate placing of an order for about 100 new carriages which will likely include diesel-battery engines - described as “the Toyota Prius” of trains. This would allow Irish Rail to improve capacity far in advance of electrification to Maynooth and Drogheda lines.

The following sections of the national road network will be progressed through early planning during 2018 to prioritise projects proceeding to construction in the National Development Plan.

• N2 Clontibret to the Border

• N2 Ardee to south of Castleblaney

The National Development Plan provides for

investment to support the ambition for development

of the border region, including:

• the N14 Manorcunningham to Lifford;

• the N4 Collooney to Castlebaldwin;

• the N5 Westport to Turlough and Ballaghdereen

• the N56 Dungloe to Glenties and Mountcharles

• an examination of opportunities for

improvements in journey times and investment in

• the next phase of the restoration of the Ulster

• support for the Narrow Water Bridge project in

High Quality International connectivity is envisaged for the State’s ports and airports through.

• Investment at Dublin Port, the Port of Cork

The plan noted investment by Dublin Port of a €230 million infrastructure pachage to accommodate larger sea-going vessels and increase capacity.

The Port of Cork is also investing about €90 million in the redevelopment of its existing port facilities at Ringaskiddy to accommodate larger sea-going vessels and increase capacity. Shannon Foynes Port Company will be investing €27 million towards capacity extension works at the port.

The plan noted Dublin Airport’s plans for a new runway by 2021 at an estimated cost of€320 million which will continue to be developed as an international hub. It also noted the Irish Aviation Authority has commenced work on a €50 million investment in a new visual control tower at Dublin Airport to facilitate tower control services in a parallel runway environment.

In line with the 2015 A National Aviation Policy for Ireland, the roles of the Cork and Shannon airports as key tourism and business gateways for their regions, will be supported. Continued Exchequer support for smaller regional airports is planned under the Regional Airports Programme which includes Ireland West Airport Knock, Waterford Airport, Donegal Airport and Kerry Airport.

The plan noted Ireland West Airport at Knock plays a more regional role in terms of international access than the other smaller airports given its location in the northwest. The airport Strategic Development Zone will (SDZ) will “contribute to the long-term development of the regional economy, the rpeort said.

Based on an average annual growth rate of 3 per cent the airport network is expected to deliver in the region of 45 million passengers by 2027.