Women of Belfast: ‘We get along. Why can’t the politicians?’ 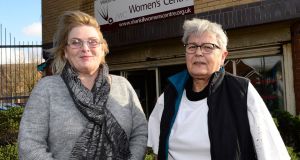 Lisa, from Shankill Road in Belfast, is speaking candidly about her engagement with politics. “I’m from a Protestant background, but if I have a problem with the brew” – social-welfare benefits – “or my children’s educational needs, or housing, I’d go to Sinn Féin,” she says. “They get things done for you. Our politicians, you never see them. They’d be middle class. They don’t really work for the likes of us.” Would she vote for Sinn Féin? She shakes her head vigorously. “Oh no. I vote DUP.”

Another Shankill woman says her daughter was being bullied at school and had tried to kill herself. “I went down and saw Gerry Adams, and he got her home tutoring and a place at the community school at Conway Mill,” she says.

Christine Conlon, from a Catholic background and the nationalist Springfield Road, wags her finger at her. “I’m going to squeal on you!” she says. Laughter erupts. Conlon advises the women to try the Children’s Law Centre. “They are great for fighting for children,” she says.

The centre is in the heart of loyalist west Belfast, but the women who gather here to talk about history include some from Falls Road and Springfield Road

Shankill Women’s Centre is in the heart of loyalist west Belfast, in what used to be an area dominated by the paramilitary UVF, but the women who gather here to talk about history include some from Falls Road, Springfield Road, Moyard and other inner-city areas.

During the day, when the peace-line gates are open, many live within walking distance of the centre. They had two local historians in on Thursday to talk about the lily and the poppy, symbols of remembrance that are almost exclusively worn by members of one community or the other, not both.

But afterwards their talk was of the collapse the day before of the talks that were meant to restore the power-sharing Northern Ireland Executive, at Stormont, and of their own worries about life in a political vacuum.

They have a lot of worries. These women live in areas that consistently feature on lists of the most disadvantaged in the North. Claire McLoughlin is concerned about the new universal-credit social-welfare benefit that is coming into place.

“We don’t know what is happening with it. I work just under 16 hours. It is going to affect my tax credits, my housing benefit and all. We are going to be really worse off. I know it’s coming from Theresa May, but we need Stormont up and running to give us an update.”

Lisa’s son has special needs. “His school has lost a lot of its funding,” she says.

Donna Quinn’s voice shakes as she talks about her daughter. “My wee girl is really struggling,” she says. “She can’t read, and they didn’t realise” until she was eight. “She was getting help at school last year, but now they can’t afford it. I have to pay for a private tutor for her, and I am on benefits. It’s really hard to find the money.”

Suzanne McGrath says she has a friend who votes for whoever has most pictures up in her area. “I vote for someone based on what they say they are going to do,” she says.

Rosaleen Toland thinks the politicians are “in a bubble” and lack understanding of the hardships of working-class life. “My mother lay on a trolley in hospital for two days, and then she got a bed, and only I was there the doctor was going to send her home,” she says.

Another woman talks about how it took five hours for an ambulance to come after her 83-year-old aunt fell and broke her hip.

“I’m sick of being lied to,” says McGrath. She is from a Catholic background on Cliftonville Road. “I’ve had people say, ‘What are you going over there to the Shankill for?’ I have never let anyone tell me who my friends should be. This place is only down the road.”

She is angry with politicians for failing to reach agreement. “It’s not fair. We put our trust in them and all we get is one-upmanship. I think it suits the politicians to push a them-and-us thing. We get along. Why can’t they?”

The women argue long and loudly about the Irish language. Some of them think it is divisive and should not be a financial priority when there are so many other needs. Others say it is about respect and accuse the DUP of wanting to dominate nationalists.

They speak approvingly of Linda Ervine, who is teaching Irish to Protestants on Newtownards Road. They agree to disagree.

They agree that people in Northern Ireland should have the same rights as others in the UK in relation to marriage equality and a bill of rights. “You shouldn’t have to go across the water to get an abortion,” Laureen Verner says.

They have had several sessions about Brexit.

Eileen Weir co-ordinates this cross-community group, which has held together for decades, including the most violent years of the conflict. “The communities get on with peacebuilding and good relations,” she says. “We have hurtful, painful conversations, but we have never fallen out.”

Shankill Women’s Centre, like similar centres, has been warned that its funding will be cut. “It makes our work unstable,” its director, Betty Carlisle, says. “We are so disappointed the talks broke down. We’ve nobody to lobby. I can talk til doomsday, but I can’t make a difference.”

Brexit is looming over everything. We are staring into darkness. If politics is meant to be about people, we desperately need leadership

The problems facing the women’s centres are common across the community and voluntary sector, which delivers many key services in the North. Lynn Carvill is chief executive of Women’sTec, which delivers skills training backed up by capacity building and childcare.

“The lack of a functioning executive is extremely detrimental to our sector and increasingly curtails what we can do. Hundreds of people are on redundancy notice,” she says. “We’ve been warned of huge cuts, and already unacceptable things are happening, like lone parents having to go out to work when their children are really young and they have no proper childcare in place.

“Brexit is looming over everything. We are staring into darkness. If politics is meant to be about people, we desperately need leadership.”

Last year senior civil servants at the North’s Department of Finance, “in the absence of ministers”, took the “unusual step” of publishing a briefing paper on budgeting options for 2018-20.

It warned that a “new executive” would need to agree a budget by this month. There were, it said, “pressing decisions” given that the cost of delivering services was increasing more rapidly than the budget available, with public-sector costs, particularly in health and education, far in excess of what the civil service deems possible. Continuing to spend as in previous years was “simply unsustainable”.

“It’s a bad-news story,” Seamus McAleavey, chief executive of the Northern Ireland Council for Voluntary Action, says of the document. “We are being made to live in a perpetual crisis. We are now going into another year with no budget and no draft budget. The place is stagnating. Everything is subject to cuts, from money to mend potholes to money for youth work which is designed to stop suicide. It is no way to run a country. We need political decisions.

“The danger is that people will see the Good Friday agreement as a failed experiment, and we’ll have to start all over again. But people in this place can hold a few contradictions. They are concerned and angry about the state of the health service, and about Brexit and about other things.

“They blame the politicians, but the vast majority of us still vote for the DUP and Sinn Féin.”