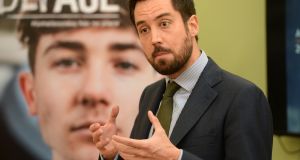 Minister for Housing Eoghan Murphy said as these families were not in traditional homeless accommodation but in ‘own-door’ temporary accommodation, they could not be categorised as homeless. Photograph: Dara Mac Donaill/The Irish Times

More than 1,600 people removed from homelessness figures are still accessing homeless services and remain on the national homelessness database, local authorities have confirmed.

Since March some 1,606 people, including 981 children, who had been categorised as “homeless” by their local authorities, were removed from the monthly figures.

Minister for Housing Eoghan Murphy said as these families were not in traditional homeless accommodation – such as hostels, hubs or hotels – but in “own-door” temporary accommodation, they could not be categorised as “homeless”.

However, local authorities have told The Irish Times none of these families is deemed housed or has a lease with tenants’ rights and are temporarily accommodated. In most cases the accommodation is wholly or partially funded through “Section 10” funding specifically for homeless accommodation.

The families are “accessing homeless services” according to the local authorities, and are still included on the national Pass (Pathway Accommodation and Support System) system, described by the Department of Housing as the repository for “official homelessness data . . . produced by local authorities”.

The latest data from the department show there were 9,698 people, including 3,829 children, in emergency accommodation in September. Total homeless would be 11,304 if the additional 1,606 people were added.

Homeless people were removed from the monthly statistics in every region except the midlands (Laois, Longford, Offaly and Westmeath) in an exercise described by Sinn Féin housing spokesman, Eoin Ó Broin, as “blatant political manipulation”.

Galway City Council leads the collation of homelessness data in the west (Galway, Mayo and Roscommon), where 117 people including 66 children were removed from statistics.

A council spokesman told The Irish Times funding for these houses “is from Section 10 funding . . .The clients are still categorised as homeless but not being housed in emergency accommodation.”

In the mid-east (Kildare, Meath and Wicklow), 111 individuals, including 60 children, were removed. A spokeswoman for lead authority Kildare County Council said the families and single adults were in “transitional own-door” apartments and were “no longer categorised as being at risk of homelessness”. They “do not have tenancy agreements” and “will still be recorded on Pass as accessing homeless services”.

A total of 96 people, 35 of them children, were removed in the southwest (Cork and Kerry), where Cork City Council collates regional homelessness data. A spokeswoman said they were “now categorised on Pass as being accommodated in ‘own front door’ units [and] . . . accessing homeless support services.”

In Dublin, where 886 individuals including 594 children are no longer counted in the homelessness figures, a Dublin Region Homeless Executive spokeswoman said: “While these families are still recorded on the Pass as accessing homeless services, they are not currently at risk of homelessness.”

The situation is replicated in the midwest (Clare and Limerick) where 119 people were removed; the northeast (Louth, Monaghan and Cavan) which saw 211 removed; the northwest (Donegal, Sligo and Leitrim) with 13 removed; and the southeast (Carlow, Kilkenny, Tipperary, Waterford and Wexford) where 53 homeless people re-categorised as in “own-door” housing are still accessing homeless services.

Mr Ó Broin said: “You don’t access homeless services if you’re not homeless. Minister Murphy is claiming the families had ‘own-door accommodation’ and, as such, were not at risk of homelessness. This displays a total lack of understanding or deliberate manipulation of how homeless is defined.

“He has so contaminated the figures through his political interference that they are irreparably corrupted. The responsibility for collating and publishing them must now be handed over to the CSO.”