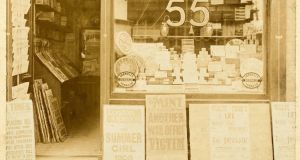 The tobacconist shop of 1916 leader Thomas Clarke on Amiens Street. Lord Mayor of Dublin Nial Ring requested the shop be added to the list of protected structures.

A vacant Georgian building, once the home and shop of 1916 Rising leader Tom Clarke, is to be bought and restored by Dublin City Council for use as a historic and cultural centre.

The three-storey red-brick building at 55 Amiens Street was last year added to the Record of Protected Structures because of its architectural and historical significance.

The building dates from the 1790s and was originally a house, but with the construction of Amiens Street Station – now Connolly Station – in 1844, the area took off as a commercial hub and number 55 was converted into a shop with living accommodation above.

Tom Clarke opened a tobacconist, stationer and newsagent shop at 55 Amiens Street shortly after his return to Ireland from New York in 1907. He ran the shop for the next four years before moving to nearby Great Britain Street, (now Parnell Street) in 1911.

Lord Mayor of Dublin Nial Ring, who requested the shop be added to the list of protected structures, said he welcomed the council’s decision to buy the building.

“That the city council is acquiring such an historic building which is largely unchanged since Tom Clarke had it as a tobacconist is great news.”

This building could be a significant location for cultural and artistic purposes in the North Inner City Area, he said.

“Hopefully, it will be restored and used for suitable history and cultural purposes and as a director of the North Inner City Folklore Project I will be suggesting that this project becomes the anchor tenant.”

Other groups such as the 1916-1921 Club and the North Inner city Commemorations Committee could also be encouraged to use the facility when refurbished, he said.

Clarke, born in 1858 in the Isle of Wight and educated in Dungannon, had been arrested on a Fenian bombing mission to London in 1883 and spent 15 years in prison before a moving to New York. On his return to Ireland in 1907 and helped reinvigorate the IRB, playing a critical role in steering it towards insurrection. He was the first signatory of the 1916 Proclamation of the Republic and was in the GPO during Easter week. He was executed May 3rd 1916.

A spokeswoman for the council said it was not yet in a position to say how much would be spent on the building and its refurbishment. “The council has agreed the terms of purchase but has not yet processed this proposed transaction.”

However, the shop was put on the market earlier this year with an asking price of about €600,000.