New asylum system will fail if backlog of applicants not cleared, Day warns 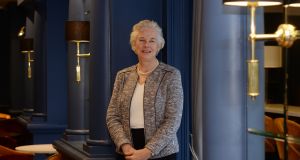 Plans to replace direct provision with a new system for asylum seekers will fail unless the large backlog of people awaiting a decision on their claims is substantially reduced, the head of a Government expert group has warned.

Dr Catherine Day said she was “absolutely convinced” that a new asylum system would be unworkable if this issue was not addressed.

The former secretary general of the European Commission said the State must implement the group’s “radical proposal” that any person who has been waiting for a decision for more than two years by the end of this year be given leave to remain in Ireland for five years.

She was speaking during the first of four webinars hosted by UCD’s Sutherland School of Law examining the expert group’s recommendations on what should replace direct provision.

The report, published in October, calls for a new system to be fully implemented by mid-2023 and says its proposed model will cost €35.9 million less than what direct provision cost last year.

The findings will inform a Government white paper on ending direct provision, which is scheduled for publication in December.

She said the group was conscious of the State’s housing crisis but that there should be a “mandatory obligation on all local authorities to source” own-door housing for asylum seekers. In the shorter term, HIQA-led inspections of direct provision centres must begin on January 1st next, she added.

Fiona Finn, chief executive of Nasc, urged policy makers to follow the recommendations and not to repeat the “missed opportunity” of the 2015 McMahon report which examined how to improve the system.

“We cannot give asylum seekers hope again and then cruelly snatch that away and say no transformative or radical changes are going to be made,” said Ms Finn.

Among the changes proposed, Ms Finn highlighted the need for accreditation tests for interpreters working with asylum seekers and also called on the Government to pay particular attention to recommendations around supports for children.

The Movement of Asylum Seekers in Ireland (MASI) spokesman Bulelani Mfaco said supports must also be provided to asylum seekers who do not avail of accommodation under the new system. At present, asylum seekers not living in direct provision do not receive weekly stipends.

Asylum seekers should also be entitled to work as soon as they submit their application for protection, said Mr Mfaco. The Government announced last month that asylum seekers must now wait six months before applying to work, down from a nine-month wait introduced two years ago.

The Day report has recommend asylum seekers be allowed to work three months after making an application for protection.

Mr Mfaco called on the State to implement all the report’s recommendations, warning that “if we start cherry picking we will be back here in five years time talking about direct provision in another working group”.

Asked whether a more humane asylum system risked creating a pull factor for more asylum seekers to come to Ireland, Mr Mfaco said people fleeing their homes were “not leafing through a brochure looking for the best welfare state in Europe” and that there was “no such thing as a pull-factor”.