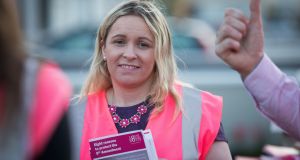 Independent TD Carol Nolan campaigned for a no vote in the referendum on the Eighth Amendment in2018. File photograph: Tom Honan

Anti-abortion TDs have set up a new all-party group and will seek to amend the legislation on abortion when it comes up for review next year.

Independent TD Carol Nolan said the amendments were likely to require that pain relief be administered to foetuses in the case of late-term abortions carried out on the grounds of fatal foetal abnormalities.

The new group, the Oireachtas Life and Dignity Group, was launched at Leinster House and published a call for what it called “a humane response” to the question of foetal pain.

“It is routine practice for unborn babies undergoing surgical procedures to be given pain relief to ensure they feel no pain or distress during the procedure,” the group said in a document published on Wednesday morning.

“Babies being aborted at an identical gestational age, however, are denied the same dignity and respect as they are regarded as non-persons in the eyes of the law and by those carrying out the abortion procedure,” it said.

Ms Nolan said that recent research had found that foetuses felt pain after 12 weeks’ gestation and said that she wanted to see “humanitarian pain relief for babies” required. She said the group would be “initiating discussions on the issue and down the road certainly there would be amendments tabled”.

The abortion legislation is due to be reviewed next year, three years after its passage.