John McDowell: ‘Safety is important but it’s not everything in such circumstances’ 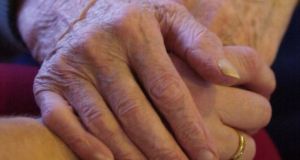 ‘If we don’t come out of this pandemic more determined than ever to devote our best brains and substantial resources to a properly integrated health and care system then I wonder when we ever will.’ File photograph: Alan Betson/The Irish Times

The treatment of older people during the pandemic “has been not far short of a disgrace,” Church of Ireland Primate Archbishop John McDowell has said.

Referring to those in nursing homes, he said “it will be interesting to learn just how much effort was put into finding ways for close relatives to visit very confused, frightened and in many cases dying residents, who had to make do with ‘she can’t visit, it’s for your own safety,’”he said.

“Safety is important but it’s not everything in such circumstances,” not least when dealing with “people nearing the end of their lives, some of them barely able to understand why they were being abandoned (or so it may have appeared to them) by their loved ones,” he said.

“We rightly accept slightly increased risks to keep schools open so that children will not lose out on their education. Perhaps, on balance, there is a case for the benefit of allowing the physical presence of someone who the person loves, and who could provide a unique sense of reassurance to them as against any threat to safety. We can only hope that someone actually asked the question,” he said.

He was delivering his presidential address to the church’s General Synod on Tuesday. Originally scheduled to take place in Croke Park last May, the General Synod was postponed because of the pandemic and is taking place online this week.

“If we don’t come out of this pandemic more determined than ever to devote our best brains and substantial resources to a properly integrated health and care system then I wonder when we ever will,” he said.

Two groups had “suffered more than most and lost more than most in this supposedly indiscriminate pandemic.The very old and the fairly young,” he said. Young people were “already saddled with a mountain of public debt as a legacy of the financial crisis of 2008.” That “has now grown to wartime proportions inside a mere eight months. And in a heartless symmetry we pile them high with personal debt as well,” he said.

It was his belief that “in terms of tax structures and investment some of us will need to be prepared to have less so that another generation can have something of the material comfort we enjoy.” And “any recovery that will be worthy of its name, and which this generation will buy into, will need to be a green recovery.”

He felt that probably everyone at the General Synod would have known “people who were either gravely ill with Covid-19 or who had family members die in almost unimaginable circumstances, unable to be with the people who had loved them longest and deepest.

“I know many parishes will have had their own ways of helping those in that sort of need. Though heaven knows it was almost impossible, except through prayer, to know what to do,” he said.

“To those people who have suffered so much, I can only point to the One (Jesus) who has gone deeper into innocent suffering than anyone ever has. And who died gasping for breath, while those who loved him had to stand ‘afar off’. And who was their companion in death,” he said.

He felt “proud of the Church of Ireland during these past months. Proud of how we’ve adapted our ministry in the face of uncertainty.” Proud, too “of our patience and civic awareness when we have been prevented from worshipping in church, such as at this moment, in both parts of this island,” he said.