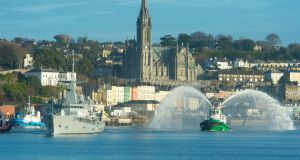 ‘LE Samuel Beckett’ is back on duty in the Mediterranean in Operation Sophia. Photograph: Michael Mac Sweeney/ Provision

Operation Sophia, the EU naval operation in the Mediterranean in which the Irish naval ship the LE Samuel Beckett is participating, is helping the Libyan coastguard return migrants to rape, slavery, torture and murder in local camps, according to a leading charity.

Médecins Sans Frontières (Doctors without Borders), citing accounts from its staff in Libya, says the EU operation is offering assistance to the regime there to intercept vessels in the Mediterranean and return them to the camps in Libya.

The Oireachtas Foreign Affairs Committee will on Thursday hear representative testimony from MSF workers which suggests that rape, sexual abuse, torture, slavery and murder are common when migrants are returned to Libya.

They will hear the testimony of one migrant who told MSF that when migrants could not pay for their release having been captured by the authorities, some had their genitals cut off.

Others said there had been routine rapes at camps to detain migrants. MSF says that it sends 50 body bags a week to one camp.

“Most of the people who we assist at sea will have spent time in places of detention or in captivity where they suffer and witness extreme levels of violence including beatings and other forms of torture or ill treatment, rape, forced labour and exploitation,” MSF witnesses will tell the committee.

“Under the pretence of saving lives and disrupting the business model of smugglers and traffickers, the Libyan coastguard are supported and empowered by EU states to intercept people at sea and send them back to the very conditions they were trying to escape.”

MSF will also be critical of comments by Taoiseach Leo Varadkar at last week’s European summit when he said that some NGOs in the Mediterranean were making the problem worse by assisting people smugglers to transfer migrants to Europe.

Last week European leaders agreed a package of measures in response to Italian concerns about the arrival of migrants in their ports from Libya. Migrants are often rescued from unseaworthy vessels operated by people smugglers and brought to Italy by rescue ships operated by NGOs. However, Italy and Malta have begun to close their ports to African migrants. MSF says that since the declaration of the EU agreement last week, 200 people have drowned trying to make the crossing.

Operation Sophia is an EU effort to rescue migrants and disrupt people smugglers, to which the LE Samuel Beckett is currently assigned. However, MSF says Operation Sophia is assisting the Libyan coastguard to intercept boats and return their passengers to inhumane conditions in Libya.

“Since the inception of Operation Sophia, crossing the Mediterranean has become more deadly. Figures from the UNHCR show that between January and March 2017, one in every 62 people died attempting the crossing. In the same period this year, one in every 30 have died,” MSF will tell the committee on Thursday.

“MSF is concerned and opposed to Europe’s stated desire to facilitate and increase interceptions by the Libyan coastguard.”