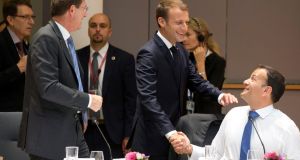 Giuseppe Conte was the new kid on the block. And clearly the new Italian populist prime minister doesn’t have a full grasp of summit etiquette. Taking the whole agenda hostage to his country’s preoccupations by refusing to sign off on any “conclusions” – “nothing is agreed until everything is agreed” – is not calculated to win friends and influence people on your first day.

There was, however, too much at stake, not least for German chancellor Angela Merkel, to simply give in to Italian demands, so they all sat it out through the night in a marathon 10-hour session that finished at 5am on Friday to agree a new text on migration that was as ambiguous and aspirational as any they have yet signed up to.

For one thing, asylum seekers landing in Italy will be regarded as arriving “in Europe”, whatever that means. Little more than a symbolic reminder that refugees are a collective European responsibility. Italy placated, however.

Overnight France’s president Emmanuel Macron brokered a deal that will supposedly help cut the flow of external migrants: it will see the EU’s border force Frontex beefed up to 10,000 by 2020, and a commitment to the elaboration of the idea of north African “disembarkation platforms” where rescued migrants can be landed and processed away from Europe – the hope being that the flow will dry up when migrants realise they will not even land on European shores.

Those who do make it will be processed in dedicated reception control centres across a number of the first-arrival EU states that volunteer to host them.

On the idea of “ disembarkment platforms”, Macron acknowledges they can only happen with the consent of third countries. To date there have been no volunteers. “I know it’s not a panacea,” he admitted,

What constituted progress, he said, was that it was now clear “that this is a European response and the funding is European”.

“It’s no longer the case that when a migrant arrives on the coast of a European country, the member country has to take care of him. Now when someone arrives in Malta, Spain, Italy or Greece, that person is arriving in the European Union.”  A European solution, he tweeted.

Well, still largely a theoretical and aspirational solution, but enough perhaps to keep Merkel’s fractious coalition allies off her back while allowing Conte to claim a victory.

Trump-like, the Five Star Movement – the populist party now leading the Italian government – was claiming just that, issuing a statement to say the meeting had produced “extraordinary results”, and it was now time to “verify on commitments taken by EU countries”.

Laura Ferrara, a Five Star MEP, said Conte’s “firmness” had “brought results beyond any expectations until a few days ago”.

It will suit everyone to encourage such an enthusiastic assessment, whether exaggerated or not. In the end most summits are about the evolving dynamics – and perceptions - of relations between leaders as much as concrete decisions.

And the Germans were also claiming victory for Merkel.

“As regards our deal on migration, it is far too early to talk about a success. We have managed to reach an agreement in the European Council. But this is in fact the easiest part of the task, compared to what awaits us on the ground, when we start implementing it.”

Ireland will also be pleased with the broader “holistic” approach that sees the refugee crisis as also a function of Africa’s underdevelopment. The leaders backed an expansion of €500 million in cash for the EU’s Trust for Africa, a point emphasised by Taoiseach Leo Varadkar in his contribution.

Leaders also agreed to the rapid disbursement of a similar sum to Turkey, the latest tranche of its payment for acting as a buffer to Syrian refugees on their way to Greece – that route has seen a 96 per cent decline in numbers.

Not all were enamoured. The long-promised reform of the EU’s asylum rules, the Dublin regulation were not addressed.

Oxfam’s policy adviser on migration Raphael Shilhav complained that the deal was inadequate and primarily directed at external migration problems and not internal secondary flows.

“EU leaders’ migration plans should have addressed the flaws of our current asylum system, and provide an effective and humane response to migration, not only respond to political problems at home,” he said.

Critically, the summit long-fingered the reform of the Dublin regulation, the EU’s controversial requirement that states where refugees first arrive in the union take responsibility for assessing their asylum claims.

The Dublin reform is still deadlocked over proposals for mandatory burden sharing in relocations. Hungary and several central and eastern states utterly reject any form of mandatory quotas – the EU leaders passed the negotiating baton on to the new Austrian presidency.