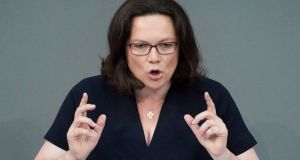 Leader of the Social Democratic Party Andrea Nahles speaking in the Bundestag in Berlin on Wednesday. Photograph: Hayoung Jeon/EPA

In a heated Bundestag debate on Wednesday, ostensibly about the budget, Dr Merkel and her Christian Democratic Union (CDU) came under fire from all sides for the asylum deal secured by its Bavarian sister party, the Christian Social Union (CSU).

After inconclusive coalition talks on Tuesday evening between CDU/CSU and SPD, the Social Democrat leader Andrea Nahles let fly at the migration plan attacked by human rights groups and Germany’s neighbours, who have announced plans to close their borders in response.

“With us there will be no closed camps,” said Ms Nahles, insisting her party would not back any unilateral action or any proposals that curtail legal proceedings for asylum seekers.

Three years after the SPD rejected a similar camp proposal from the CSU, she reminded her coalition partners that the latest proposal was not agreed in coalition talks and will go nowhere without SPD support.

The new “transit camps” propose holding migrants in three camps on the German-Austrian border until an expedited asylum procedure establishes if they have filed for asylum elsewhere in the EU. If so they will be returned there on the basis of a bilateral agreement.

If Berlin cannot come to any such agreement with that country the migrants will, depending on agreement with Vienna, be sent back over the border to Austria.

In the Bundestag Dr Merkel said the EU’s future depended on it resolving the migration question. and pressed for rapid implementation of last week’s political migration agreement in Brussels.

Europe needed – urgently – answers on the migration question that reflect European values, are legally consistent, show solidarity with other member states and, she said, offer “realistic answers that don’t overwhelm our society”.

“We need more order in all types of migration so people have the impression law and order is implemented,” she said, promising greater effort to boost a 15 per cent return rate on asylum seekers in Germany registered elsewhere in the EU.

Bavarian CSU leader Horst Seehofer, who pushed for the camps, visits Vienna on Thursday to explain his proposals. He said arrivals in the camps would be processed within 48 hours, in keeping with the German constitution, and that many would be returned “to the country they came from”. With an eye on SPD resistance in the Bundestag, he said he had “no doubt” that the transit camp proposal would eventually find favour in the coalition.

“I am confident we will get this through,” he said.

In the Bundestag debate, CSU floor leader Alexander Dobrindt predicted Monday’s agreement would send an important signal to would-be migrants that not everyone is entitled to enter Germany “just because they have reached European territory”.

“I wish that you would scrape together what’s left of your common sense and start governing this country sensibly,” he said.

Left Party co-leader Dietmar Bartsch said the CSU “would have deported Jesus with a smile”, suggesting the C in its name stood for “chaos” and not Christian.

Meanwhile, Alice Weidel of the far-right Alternative für Deutschland (AfD), standing between the CSU and a renewed absolute majority in Bavaria, said that Germany had become “ a madhouse and the chancellery its headquarters”.