Hungary says Austria is the key to migration deal with Germany 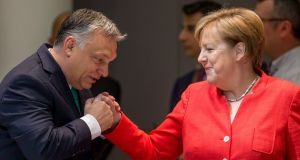 Hungary’s nationalist prime minister Viktor Orban is due to hold talks with German chancellor Angela Merkel on Thursday, having suggested they could seek a deal on migration if Berlin first reached agreement on the issue with Austria.

Mr Orban built fences on Hungary’s southern borders in 2015 to stop migrants and refugees crossing the country, and he has led strong opposition in central Europe to German efforts to impose refugee quotas on EU states.

There is now concern across the region about the impact of a deal agreed this week between Dr Merkel and her Bavarian allies to erect closed “transit centres” for asylum seekers on Germany’s border with Austria.

Dr Merkel hopes the centres will ease migration pressure in Germany – and tension between her Christian Democrats and the Bavarian Christian Social Union – by identifying migrants who have already registered in other EU states and sending them back there.

Germany must first agree bilateral deals with states to which such migrants will be returned, however, and secure Austria’s agreement to accept people whom Germany will not admit and another EU country will not take back.

“And only at the end, if there really is clarity about the German position, [can there be] negotiations between Hungary and Germany.”

The Hungarian premier’s office said he discussed the issue by telephone on Tuesday evening with anti-immigration Austrian chancellor Sebastian Kurz.

Mr Orban seems confident that any deal that Mr Kurz may agree with Dr Merkel would not force him to accept large numbers of returning migrants, and would place the onus for taking them back on EU states that they crossed en route to Austria and Hungary – above all Greece, Italy and Bulgaria.

Mr Kurz has warned that if the German plan came into effect, Austria may respond “by taking national measures at our borders, particularly our southern borders”.

While the most dramatic impact would probably be felt on the Austria-Italy frontier, Balkan countries fear a “domino effect” could be triggered by tighter security on the Austria-Slovenia border.

Thousands of migrants are still trying to move north through the Balkans – Serbia and Bosnia are now hosting about 3,000 people each – and states across the region warn they will tighten their southern borders if their northern neighbours do the same, to prevent large numbers of people becoming trapped on their territory.

Balkan leaders have also rejected speculation that they could host new facilities envisaged in an EU deal agreed last week, for “controlled centres” in member states and “disembarkation platforms” outside the bloc, where potential refugees would be separated from so-called economic migrants, and the latter sent home.

Hungarian, Polish, Slovak and Czech leaders hailed the deal because it dropped the refugee quota plan that they opposed; Slovakia, however, subsequently offered to take as many as 1,200 migrants from other EU states on a purely voluntary basis.