Merkel’s coalition in the balance as allies row over migration 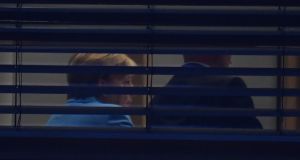 German chancellor and leader of the Christian Democratic Union Angela Merkel and party members at a leadership meeting at the CDU headquarters in Berlin. Photograph: John Macdougall/AFP/Getty Images

A crisis meeting of the Christian Social Union (CSU) in Munich dragged on into late evening amid disagreement over whether last week’s EU political proposals on asylum seekers were sufficiently robust to avoid German border closures.

“The situation is serious, everyone knows that,” said Dr Merkel on German television on Sunday evening.

From Monday, CSU leader Horst Seehofer, federal interior minister in Berlin, said he would instruct police to turn back at German borders migrants without valid papers, and those already refused asylum or registered elsewhere in the EU – unless Dr Merkel could convince European leaders to sign up to “equivalent” measures to reduce asylum numbers in Germany.

The chancellor returned from last week’s all-night summit agreement convinced she had a deal to appease the CSU, but her hopes of ending her coalition crisis evaporated in a long weekend of closed-door meetings and megaphone diplomacy.

“Europe works slowly and . . . even after this summit this [migration] issue is far from resolved,” she said. “I am in favour of Europe remaining together.”

Friday’s political agreement in Brussels promises to step up controls on the EU outer border and bring migrants to central processing camps inside and outside the EU.

In addition, Berlin struck bilateral agreements with Greece, Spain and a reported dozen others to send back from Germany asylum seekers already registered there.

After conciliatory signals on Friday, senior CSU officials said on Sunday that, on closer inspection, the agreement was filled with “contradictory small steps”.

The CDU and CSU sister parties have wrestled on Dr Merkel’s liberal refugee policy since Germany accepted more than 1.4 million people in 2015 and 2016.

Germany has tightened up its asylum procedures since then and new arrivals have fallen dramatically. But the CSU wants even tougher border rules to salvage its law-and-order profile, and endangered absolute majority, when Bavarians choose a new state parliament in October.

If Mr Seehofer goes against Dr Merkel’s wishes she is likely to fire him, triggering a walkout of CSU ministers in Berlin and a likely rupture of the 69-year-old CDU/CSU parliamentary party alliance and Dr Merkel’s coalition.

Asked if she would discipline her rebellious coalition partner with a Bundestag confidence motion, Dr Merkel replied: “We’ll see.”

On Sunday evening, Dr Merkel appeared to concede her response to the refugee crisis had given a political boost to the far-right Alternative für Deutschland (AfD).

“Perhaps there is sometimes a yearning for simple answers,” she said, “and that without Merkel there would be no migration problem.”