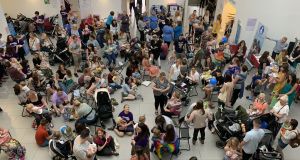 Some 611 people were at the Big Latch On at the Ulster Museum, where 236 mothers provided milk for 237 children at the same time. Photograph: Amanda Ferguson

Hundreds of people have attended a breastfeeding festival, Breastival, in south Belfast.

Some 611 people were at the Big Latch On at the Ulster Museum, where 236 mothers provided milk for 237 children at the same time.

Now in its third year, the festival was co-founded by research fellow Dr Jennifer Hanratty in response to comments made by the DUP’s Sammy Wilson that breastfeeding should be done in private.

The East Antrim MP initially described women wanting to breastfeed in the House of Commons as “voyeuristic” before changing the word to “exhibitionism”.

“That annoyed me,” Dr Hanratty said.

“Hearing that negativity made me angry so we decided to do something positive.”

Dr Hanratty (36) from Belfast via Dunadalk said the event was taking place again this year to coincide with World Breastfeeding Week and was about “protective, supportive environments to enable breastfeeding”.

“It is natural but it is challenging, it has to be learned and needs to be supported.”

Florist Sarah Cassidy (28) from Lurgan has breastfed all of her three children and is a breastfeeding support volunteer with the Southern Trust, helping other mothers.

“Every breastfeeding mummy is doing something to normalise breastfeeding and collectively can make a change in society,” she said.

“The message to society is that we have lost that close-knit clan connection where women come together and support each other and we need that back.

“It may not be women in your family but we can support each other and empower each other.”

Research fellow Dr Aoibheann Brennan-Wilson (32) from Belfast was breastfeeding four-month old baby son Oisín, and preparing to breastfeed his twin brother Fiachra, as she spoke to The Irish Times.

“It’s nice to share the day with others, and there is a twin mum meet up to share experiences because it is very different feeding two,” she said.

“It’s not every day you get to do boob jokes and show your boob drawings so it’ll be nice for them to have another day out. The drawings, not the boobs,” she said.

“I had great support when I was breastfeeding.

“The hardest bit for me was not being able to do much but it was great.

“I noticed the social awkwardness around people being afraid of seeing a boob so my advice to others would be to ignore that and feed your baby and let people do their own thing.”

“It’s really important that breastfeeding is supported by the council,” he said.

“The health benefits are there to see for the mother, for the child, and I think council have already created spaces in City Hall in their facilities to facilitate breastfeeding.

“It should be normalised and encouraged and promoted at every opportunity so I was delighted to be asked to lend my support for the festival.”