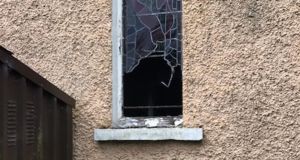 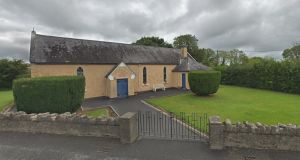 On the busy N4 road on the Dublin side of Longford, St Michael’s Church in Shroid, Co Longford is only opened for mass once a week, on Sunday mornings. Image: Google Street View

A small Longford community has been left feeling “violated” after their church was vandalised for the second time in as many years, a parish priest has said.

A stained glass window, depicting the Sacred Heart, over the altar at St Michael’s Church in Shroid was destroyed in the latest attack. Three other plain glass windows were also smashed.

Fr Tony Gilhooly, parish priest, said a passer-by alerted the parochial house to the damage on Friday. “We are extremely upset,” he said.

“It is a place of worship. It would make you cry, really. It is the second time this little church has been vandalised. There was nothing of value, other than sentimental or religious value, to be taken.”

It is not believed anything was taken from the church. On the usually busy N4 road on the Dublin side of Longford, it is only opened for mass once a week, on Sunday mornings.

At Easter two years ago, thieves broke the stained glass window, smashed a plinth and stole the tabernacle, in what was described by a bishop at the time as an “act of desecration”.

Fr Gilhooly said the church “is one of the oldest if not the oldest church in the diocese” of Ardagh and Clonmacnois.

The stained glass window will have to be completely replaced, according to the priest. “It is a beautiful depiction of the Sacred Heart, in red,” he said.

“It is an old style stained glass window. Half the glass has been destroyed, and the rest of it has been cracked. The window will have to be replaced. It will be quite expensive.”

Fr Gilhooly appealed to those behind the vandalism to “live and let live”. “What did they gain by doing it?” he said. “We — the community — feel violated.”

Bishop of Ardagh and Clonmacnois Francis Duffy said he was “deeply saddened” at what he described as “the violent attack on Saint Michael’s Church.”

“Let there be no ambiguity, this is not a victimless crime,” he said.

“Vandalism of this kind is profoundly disrespectful to people of faith and to places of worship. It is threatening and distressing.

“In a truly pluralist society these examples of vandalism are of concern to our whole community.”

Bishop Duffy said another church in the parish, Saint Anne’s in Curry, was vandalised last year.

Gardaí confirmed they are investigating a suspected burglary at the church which they believe happened sometime between July 28th and August 2nd.

“Inquiries are ongoing,” a Garda spokesman said. “Anyone who noticed any suspicious activity in the vicinity should contact us at Longford Garda station.”