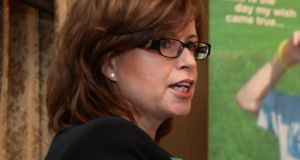 The Make-A-Wish children’s charity has accumulated a backlog of individual experiences to fulfil due to the Covid-19 pandemic which has forced it to completely overhaul the way it operates.

Since 1992, Make-A-Wish Ireland has helped children with life-threatening medical conditions, many of whom do not survive their illness. With no government funding, it is entirely reliant on public charity.

The organisation, which launches its Christmas appeal on Monday, estimates that by the end of the year it will have more than 200 seriously ill children waiting for their wishes to be granted, with plans either rescheduled or reimagined in many cases due to the collapse in global travel.

“We are not going to be granting the same wishes that we have in other years,” said chief executive Susan O’Dwyer.

As well as the cancellation of foreign travel to favourite destinations such as Disney Land, volunteer work has been restricted and many of the ‘wish packages’ have been delivered to the homes of children for their parents to oversee. Even replacement “staycations” have been derailed by Level 5 restrictions.

The number of applications to the charity has also dropped.

“These children need us now more than ever because they live with this isolation on a regular basis because of their conditions. Covid has exacerbated that,” explained Ms O’Dwyer.

Clodagh Sweeney Marett, whose daughter Keri died last year on her 16th birthday, praises the experience her family had at a Dirty Dancing musical in Dublin last year.

Of Keri, she said: “She loved music, princess stuff, she was a real girly-girl and she loved people talking to her and singing to her.”

Keri had quadriplegic cerebral palsy and brain damage, and every detail of the experience had been thought through, her mother recalled, from nail painting in the hotel to a VIP compartment at the theatre, away from a potentially overwhelming crowd.

“She absolutely loved every second of it. Afterwards they arranged for us to meet the cast and they were so good to her,” she said. “Even though she was severely special needs they communicated with her so well, like any other child.

“I don’t think people realise how much it means to kids and their families. We have memories beyond memories.”

This year, Make-A-Wish is hoping its Believe in Magic Christmas appeal will help them deliver the wishes of the more than 200 children still waiting.

It has drafted in the magician Keith Barry to help promote its online donations drive at makeawish.ie.

4 Covid-19: Over 2,000 student nurses to leave placements so trainers can return to wards