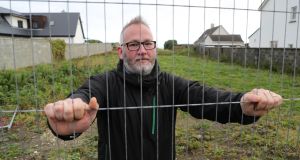 Damien Doyle in Rush, Co Dublin, on the site of a new home he is building on Tower Street. Photograph: Nick Bradshaw

A Dublin couple say they are facing a €35,000 development fee to build a home designed to ensure their profoundly disabled daughter can have a live-in carer when they get older.

Under current planning legislation, extensions to existing homes for the disabled are exempt from such fees to Fingal County Council, but new homes are not. The rules were changed to apply to extensions only in 2010.

Damien Doyle, whose 13-year-old daughter Grace uses a wheelchair and is in need of constant care, said the rules as they stand mean his family cannot afford all of the desired interior aspects of the new home they are building in Rush, Co Dublin.

Development contributions are the fees that property owners pay to a local authority for building works. A public consultation on the council’s development contribution scheme has just concluded. The next phase of the scheme, due to run from 2021-2025, is set to be discussed at a council meeting in mid-December.

Mr Doyle has been lobbying councillors but says that even if the rules are changed at the meeting, they will not come into effect in time for his family.

“The hope was to build this house for Grace. The downstairs of the house, about 90 per cent of it is all in relation to [her needs],” he said, explaining that it is also designed to accommodate a live-in carer. Grace, the eldest of three siblings, has an extremely rare chromosomal condition called 12P Duplication syndrome.

“When we get old I won’t be able to lift her, nor will [my wife] Helen...we will need someone to look after Grace and they will need somewhere to live.”

Initially believing they were exempt from the development contribution, they have now had to cut back work on the house to pay the fee. “At the end of this we are all going to have to share one bathroom,” he said.

Last month, Mr Doyle wrote to Minister for Housing Darragh O’Brien telling him Grace had suffered two strokes since 2019 and that he had closed his business to care for her. “I have never cried so much in my life during the last 16 months,” he wrote.

In response, Mr O’Brien said that as Minister he was prohibited from intervening in planning issues but that he would pass it on to a local councillor.

Fingal County Council said the exemption for domestic extensions also covered new builds until 2010 but did not comment on why the policy narrowed.

“A number of submissions on this exemption have been received during the public consultation period on the draft scheme and will form part of the chief executive’s response on submissions received for the elected members to accept, reject or modify at the council meeting to be held in December,” it said.

A number of members of Fingal County Council have voiced support for Mr Doyle’s calls for change.

“The only problem for Damien is that if it’s changed, it will be changed next year and it still leaves him with a bill,” said Social Democrats councillor Joan Hopkins.

Fianna Fáil councillor and former primary school principal Brigid Manton said new builds were exempt from such fees in other local authorities. “I spend a lot of my working life just trying to get the rights of these families answered. Their access to everything seems to be a battle,” she said.

Her party colleague, Cllr Brian Dennehy, said it was a “spirit of the law” issue. “I don’t think any right-thinking person would want to see this situation arise.”