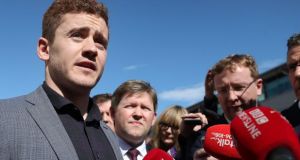 Ireland and Ulster rugby player Paddy Jackson outside Belfast Crown Court after he was found not guilty of raping a woman in Belfast in June 2016. Photograph: Niall Carson/PA

A branding and social media expert has warned that the IRFU and Ulster Rugby cannot “ditch” the family-friendly values they promote as they determine the futures of Paddy Jackson and Stuart Olding.

Tim McKane of Belfast-based Navatalk digital marketing agency says senior representatives of the organisations conducting an internal review should think very carefully about the wider audience observing proceedings, and “the leadership they show will be very important”. What happens next is now about Ulster Rugby and the IRFU standing over the promotion of themselves as having “family-friendly values”. “You can’t just ditch that,” he said.

Last week both men, who have been “relieved of all duties” since the legal process began in 2016, were found not guilty of raping the same woman in 2016.

On Friday, in a statement to the Press Association, Mr Jackson said: “I am ashamed that a young woman who was a visitor to my home left in a distressed state. This was never my intention and I will always regret the events of that evening.”

He added: “I am also truly sorry for engaging in a WhatsApp group chat which was degrading and offensive and I apologise unreservedly for this.

“The criticism of my behaviour is fully justified and I know I have betrayed the values of my family and those of the wider public.

“Following the trial I have taken time to reflect with my family on the values that were such an integral part of my upbringing, the most important of which is respect.

“My departure from these values has caused understandable public anger and I am resolutely committed to returning to those principles.”

The statement by his lawyer immediately after the trial had focused on the “heavy price personally, professionally and financially” suffered by Mr Jackson and his family. Social media commentary since Friday’s statement has ranged from welcoming the perceived change in tone in his latest statement to dismissal of it on the basis people believe he is not genuine and is merely attempting to save his career.

In recent days Ulster Rugby has received phone calls and emails from the public regarding the future of the players, with some people contacting officials to express support for the men, while others are calling for their dismissal.

On Friday afternoon an Ulster Rugby source said officials are “taking everything on board”. On Mr Jackson’s latest public statement and the reaction from rugby fans a statement from Ulster Rugby said: “As this matter is now in review it would be inappropriate to provide further comment.”

A female source close to Ulster Rugby told The Irish Times officials are looking at “better ways of educating young players”. On what the feeling is in the “rugby family” regarding the players she said the majority of people want them to return to playing. “Everyone is behind the boys,” she said. “It’s almost seen as a wee bit of a witch hunt.”

A male source close to Ulster Rugby says the tone of Mr Jackson’s statements has changed from “bullish” to “contrite”.

He believes a “huge disservice” has been done to the sport of rugby and, for anyone “heavily involved in the game, like I am, it is very embarrassing”.

He believes the public discourse around the trial, sexual violence, consent, and respect for women will help change society for the better.

Mr McKane says the IRFU and Ulster Rugby face a difficult task. “If the equivalent language had been used about religion or race, the organisation wouldn’t have a leg to stand on,” he said.

“If Ulster believes in values of wanting it to be an inclusive family sport they have to take this very seriously and address every issue.

“Sponsors also will be looking at this very closely,” he said. “There will be a need to look at the business goals of those sponsors. It’s not just to give them money, they don’t want to risk their customer base. They will have to be taken into consideration.”