Minimum wage increase: What will that extra 25c buy you? 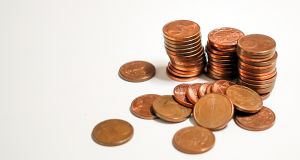 In the budget the Minister for Finance announced that the hourly minimum wage will increase from €9.55 to 9.80 from January 1st. Photograph: iStock

In Tuesday’s budget, Minister for Finance Paschal Donohoe announced that the hourly minimum wage will increase from €9.55 to €9.80 from January 1st, 2019.

We set out to discover what you can buy with that 25 cent.

The increase was described as derisory by the National Youth Council of Ireland while the Labour Party said the living wage of €11.90 should be the next target for Government.

Stealth charges in cafes and restaurants mean this increase is a case of jam and indeed butter tomorrow with some charging 20-30 cent for these and other basic condiments such as ketchup and mayonnaise.

You may wish to start spending, but you’ll find it will be gobbled up as soon as you take out your plastic. Some banks charge 30 cent for every ATM withdrawal or 20 cent for every time you use your debit card.

Penny sweets were once a frugal treat but they now typically cost two cents each so you can get 12.5 of them with your increase.

The Freddo bar, which used to be a good barometer of the economy as it was one of the cheapest bars you could buy with your pocket money, is now 40 cent. A drumstick lollipop has also kept abreast with inflation and will now set you back 20 cent as will a marshmallow bar called Flump.

Beans on toast is often a staple dinner if you’re stretched coming up towards pay day but a can of basic baked beans cost 29 cent in Dunnes Stores while a sliced pan costs 70 cent.

It’s bad news for millennials as their beloved avocados do not leave much short change from a euro - Tesco currently has them on sale for 45 cent.

When The Irish Times asked the local corner shop (Spar) for their cheapest item, we were told it was a small box of matches. With a packet of cigarettes set to increase by 50 cent to €12.70, your saving will have gone up in smoke as it will take two hours on the minimum wage to recoup it.

The price of a pint or bottle of wine was left alone in this Budget but there are some pubs which charge between 25 cent to €1 for a dash of cordial in a pint of tap water.

If you’re looking for other ways to spend, it costs 20 cent to use the public toilets in St Stephen’s Green shopping centre in Dublin city, and indeed most shopping centres.

It costs €1 to use the internet for twenty minutes in a web cafe on Dame Street so 25 cent will get you five minutes - enough time to spend looking at photos of sloths having baths on Facebook. You can however get one black and white page printed for 20 cent.

Face masks: All you need to know about where, when and why you need one 16:29
Adrian Donohoe murder accused says he cannot place raiders’ accents 16:26
EU taxation to change, but must be ‘as fair as possible for Ireland’ – Donohoe 16:11
Unemployed and unskilled workers most likely to be admitted to psychiatric care 16:08
Protection order granted to woman who said husband made her take lie detector test 15:57

1 Coronavirus: Unwinding of latest stage of roadmap ‘could be pushed back further’
2 Face masks: All you need to know about where, when and why you need one
3 UK accuses Russia of election interference and trying to steal Covid-19 vaccine
4 Coronavirus in Ireland: Further reopening delayed amid 'worrying' rise in infection rates
5 Like ‘a grandfather at the sherry cabinet’: Trump’s meandering monologue
Real news has value SUBSCRIBE