Price hike taking cost of pack of 20 to around €12.70 welcomed and slammed 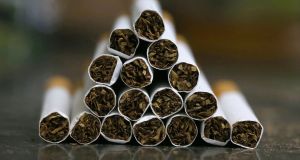 Pro-smokers group Forest Ireland reacted with dismay and said smokers “have been the whipping boys of successive governments for far too long”.

Fuel and alcohol were spared any tax increases in Paschal Dohohoe’s second budget but tobacco was hit hard again as the Minister for Finance confirmed a widely anticipated 50 cent increase in the duty on a packet of cigarettes.

In an effort to increase the price of cheaper tobacco, Mr Donohoe also announced a Minimum Excise Duty all such products means and cigarettes which have a selling price of below €11 will have the same excise applied as cigarettes sold at €11.

Welcoming the move, the Irish Heart Foundation’s Head of Advocacy Chris Macey said price increases were “the most effective way to discourage smoking, particularly among young people” and he said an increase of €2 in three years had helped to drive “a dramatic decrease in teenage smoking rates”.

He said the tobacco industry needed an estimated 50 young people to take up smoking every day “to replace those its products kill or who manage to quit. So every annual tax increase brings the end of this vile trade in Ireland a little nearer.”

Mr Macey said the “failure to close the price gap between manufactured cigarettes and much cheaper roll-your-own tobacco through an additional increase on these products is disappointing given their popularity among young people”.

He also raised concerns about the failure to ring fence revenue from the sugar sweetened drinks tax to help tackle childhood obesity and said it represents “a failure in the State’s duty of care to children”.

Retailers Against Smuggling (RAS) said the excise increases would only serve “to further incentivise smuggling and undermine Irish retailers”.

Spokesman for the lobby group Benny Gilsenan, said the decision was “another slap in the face to retailers that have been compliant with every decision made by this Government” and he called on Revenue to be given more resources to protect businesses from illicit trade.”

He said the 50 cent increase would further widen the gap “between legitimate shop-owners that are earning an honest living, and gangs peddling €5 cigarette packets in our communities. What’s more, this is little more than a stealth tax on our law-abiding customers, who choose to buy legitimate product rather than smuggled product from the street.”

Pro-smokers group Forest Ireland reacted with equally dismay and said smokers “have been the whipping boys of successive governments for far too long”.

Its spokesman John Mallon claimed that the increase was “immoral because it deliberately targets low earners and others who can least afford it”.

He said smokers “expect to pay a fair level of tax on what is a potentially unhealthy product but there is no logic in pursuing a policy that discriminates against the poor, hurts legitimate retailers and enriches criminal gangs and governments abroad.”