Teenager’s hospital discharge delay due to lack of care services 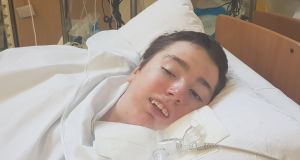 Morgan D’Arcy (17) has been an inpatient at Crumlin children’s hospital for almost five years. Twice, since he was 12, he was deemed well enough to go home, but due to housing and homecare difficulties, he has been unable to leave the hospital.

Morgan has spinal muscular atrophy type 2, a rare genetic disorder that affects the nerve cells controlling voluntary muscles. Morgan is not able to stand or sit up unaided. He cannot swallow, he has difficulty breathing and his limbs and trunk are twisted and contorted due to scoliosis. He can, however, hear, speak and “has a great sense of humour”.

He needs 24-hour care, involving the use of a hoist, changing and cleaning his Peg feeding tube and suctioning clear his airways as often as every 20 minutes. His mother, Muriel Slevin, said she was “heartbroken and exhausted battling the HSE to get the care he deserves, at home”.

Morgan was born in Germany and diagnosed there at about 10 months old. Muriel brought him back to Ireland so she could liaise with healthcare professionals in English. His father is no longer involved in their lives.

Muriel and Morgan lived in a small apartment in Tyrellstown, north Dublin and she sent him to a Central Remedial Clinic school for a time, from age four.

“He kept getting colds and infections so I had to home-school him.”

In April 2014 he was admitted to Crumlin hospital with severe dehydration, and has been there since. He developed pneumonia twice, chest complications and from then required specialised breathing and suctioning equipment.

“In June 2014 he was ready to come home but the social workers said he couldn’t be discharged to the apartment because it was too small. So I had to go and find a new place to live that was wheelchair accessible and had space for his chair, a special bed, a hoist and all his equipment.”

During the search, and amid housing applications to both Dublin City Council and South Dublin County Council (SDCC) – so Morgan would live close to either Crumlin or Tallaght hospitals – he developed serious seizures which turned out to be epilepsy and he had to have an operation to have a Peg feeding tube inserted.

“He has been stable since late 2016 and began to really improve from January 2017,” says Muriel. “In November 2017 the discharge planning began.”

It was not until May 2018, however, that she was allocated a suitable house, in Clondalkin, by SDCC. Since then Morgan has been clinically well for discharge and has had a suitable home to go to.

He was approved by the HSE for a 160 hours-a-week homecare package, his discharge was set for November 5th, 2018 and private care providers were invited to tender for Morgan’s care.

One was awarded the contract but it became clear, according to Muriel, when its healthcare assistants worked with Morgan in the hospital, the provider “didn’t have the capacity” to deliver the level of care Morgan needed.

Providers were invited again to tender for Morgan’s homecare and another assessed him in early February. It too has decided, however, it does not have the capacity to provide the care Morgan needs at home.

“We need to go home,” Muriel said. “It’s awful, awful, awful living like this, in a fishbowl. Why can the HSE not meet his basic needs?”

A spokeswoman for Our Lady’s Children’s Hospital, Crumlin said it could not comment on any case individually. She said: “CHI supports the establishment of a homecare budget by the HSE with clear processes surrounding the application process, thus helping to eliminate the need for protracted negotiations by parents during what is a stressful and difficult time.”

A spokeswoman for the HSE said it could not comment on an individual case, but said that while homecare packages in the south Dublin and Kildare region took 15-25 working days to process, some cases took longer due to their complexity and the availability of services to meet their needs.

“The HSE can confirm that every possible measure is being taken and examined to assist families who are waiting on paediatric homecare packages.”

Asylum claims by Georgians and Albanians brought to abrupt halt 02:43
Ireland on alert as suspected case of coronavirus treated in Belfast 02:19
Council ‘held to ransom’ by Government over €182m payment 02:00
Call for improved rent collection as 61% of Dublin council tenants in arrears 02:00
‘Serious’ child abuse allegations repeatedly not investigated 01:00