Blasphemy and Ireland: Everything you need to know 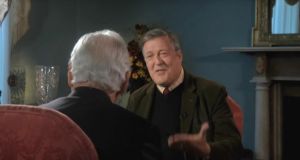 Stephen Fry is interviewed by Gay Byrne on ‘The Meaning of Life’. Photograph: RTÉ

Blasphemy? What is it?
“Impious or profane speaking of God or sacred things’’ as banned by the second of the Ten Commandments and the Irish Constitution under Article 40.6.1.i. The Article bans “the publication or utterance of blasphemous, seditious, or indecent matter”, offences “which shall be punishable in accordance with law”.

. . . Really?
Well, not really. The 1961 Defamation Act prescribed maximum penalties of seven years’ penal servitude for blasphemous libel or two years’ imprisonment and a 500 pound fine. But it still did not define the offence.

Any prosecutions?
Not one. In fact there were no prosecutions for blasphemy in Ireland during the 140 years between 1855 and 1995.

What happened in 1855?
In Dún Laoghaire, which was then Kingstown, a Protestant Bible was burned by Redemptorist priest Fr Vladimir Pecherin, who was from Ukraine and then chaplin at the Mater hospital in Dublin. He was charged following a complaint from Methodist minister Rev Robert Wallace. The case was thrown out when Fr Pecherin claimed he had not intended to include a Bible (even a Protestant one) in his bonfire of bad books.

And 1995?
Ah yes. A Dublin Bus experience. None for 140 years then three come along at once. All brought by Catholic John Corway, who claimed an editorial in Hot Press magazine, as well as cartoons by Martyn Turner in The Irish Times and Wendy Shea in the Irish Independent, were blasphemous.

Mr Corway said he had “suffered offence and outrage by reason of the insult, ridicule and contempt shown towards the sacrament of the Eucharist as a result of the publication of the matter complained of herein and I am aware of other persons having also so suffered”.

By coincidence, of course, this happened during the bitterly fought divorce referendum campaign of that year.

And?
The case was thrown out by the High Court and then by the Supreme Court, after Mr Corway appealed it there.

Followed by. . . Nothing, as usual where blasphemy in Ireland is concerned.

When was the last successful action for blasphemy in Ireland?
That is not at all clear, but in 1703 Unitarian minister Thomas Emlyn was fined 1,000 pound and imprisoned for a year in Dublin when he denied the divinity of Christ.

You mean there hasn’t been a successful action on blasphemy in Ireland in 315 years?
So it would appear.

And now?
In 2008 the joint Oireachtas committee on the Constitution’s report on Article 40.6.1.i. was published. It said the reference to blasphemy in the Constitution was really “a dead letter” since the 1995 Supreme Court finding in the Corway case, and it felt “that in a modern Constitution, blasphemy is not a phenomenon against which there should be an express constitutional prohibition”. It even discussed a parody of the Gospels by comedian Tommy Tiernan on the Late Late Show that year, but was not for turning.

So that was that then?
Not just yet. It was 2008, the country was banjaxed and could not afford a referendum.

So?
Then minister for justice Dermot Ahern brought in a law “to remove the possibility of prison sentences and private prosecutions for blasphemy, currently provided for in Irish law”, as he wrote in this newspaper in May 2009. “The only credible alternative to this move is a blasphemy referendum, which I consider, in the current circumstances, a costly and unwarranted diversion,” he said.

Really? A law with no consequences. You cannot be serious?
I am and he was. Dermot Ahern introduced a law which prevented prosecutions for blasphemy but also complied with the Constitution. The Defamation Act 2009 introduced a new offence of “publication or utterance of blasphemous matter” which carried a maximum fine of €25,000.

What happened then?
Nothing. No prosecutions since. None. Nada. Same old, same old . . .

But Stephen Fry?
Ah yes, Mr Fry. That was in 2015 when he lambasted a God he does not believe exists on Gay Byrne’s The Meaning of Life on RTÉ One. This was a slow-burner, seemingly. Almost two years later, in 2017, a man complained to gardaí at Ennis, Co Clare, about the programme. Not that he himself was offended, like.

Gardaí searched high and low, but two days later, were unable to find “a substantial number of outraged people” to bring an action over the issue and nothing happened. Fry himself later said he was contacted by the man who had complained, who told him he had done so to show how the law on blasphemy in Ireland was really an ass. Stephen Fry thought this a “wonderfully Irish solution” to the problem of outdated legislation.

And now?
Part of the programme for Government agreed in May 2016 was that a referendum would be held to remove the blasphemy provision from the Constitution, which will take place on Friday, October 26th next, the same day as the presidential election.

What will I be asked on Friday?

Do you approve of the proposal to amend the Constitution contained in the undermentioned Bill?