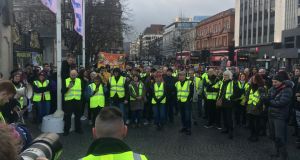 Inspired by the gilet jaunes movement in France, people in Belfast also protested over the absence of government at Stormont. Photograph: Amanda Ferguson

Austerity, poor wages and a lack of government at Stormont were among the issues raised at a yellow vest protest in Belfast on Saturday afternoon.

Inspired by the gilet jaunes movement in France, up to 200 mainly left wing activists gathered outside City Hall for what they said was a stand against elites, injustice in society, the perils of the capitalist system and the policy choices of the current British government.

People Before Profit Belfast West MLA Gerry Carroll said people were concerned about the destruction of the NHS, welfare reform and the lack of marriage equality for LGBT couples and women’s reproductive rights.

He said in France people had stood up against President Emmanuel Macron “once the darling of the liberal elite” and “so we can take on these issues here”.

“It sends a powerful message,” he said.

Mr Carroll believes those on the right wing of politics, who have organised a yellow vest protest in Belfast for next Saturday, must not be allowed to own and exploit the movement.

“It is important the left is here today,” he said.

“We are not conceding this ground to the right.”

Trade union activist Fergal McCann (56) from Belfast said he was concerned about austerity, wage levels, a lack of political leadership and apathy among the public.

“We don’t even have a government (at Stormont),” he said.

“There is so much apathy among people. I am here to encourage people to protest.”

Retail employee Ben Ritchie from Moneymore was at the protest to highlight issues around access to medical cannabis for young people.

“I can’t stick kids being bullied by the government,” he said.

In France tens of thousands of police officers are on duty as the country is in its ninth weekend of anti-government protests, which have included some violent episodes.

Mr Macron has launched a three-month public debate he hopes will channel angry demonstrators off the streets.

Where else have people protested today?

The “Britain is Broken” demonstration, organised by The People’s Assembly Against Austerity, centred on calls for a general election.

Crowds wearing yellow vests marched from outside the BBC’s Broadcasting House on Saturday to a rally in Trafalgar Square, where they were addressed by politicians, political activists and trade unionists.

Addressing the issue of Brexit, he said he expects MPs to defeat Theresa May’s deal in Tuesday’s Commons vote.

Mr McDonnell said after that, when “the time is right”, his party will move a motion of no confidence to “bring this Government down”.

“It’s now here before us, we could have a socialist prime minister,” said Mr McDonnell.

He read out a message from Labour leader Jeremy Corbyn to protesters: “We need a general election now to bring about the fairer, more equal society we all want to live in and we stand ready to take power.”

Labour MP Laura Pidcock told the crowd that “millions of people are enduring the indignity of poverty”. She acknowledged there is “division” over Brexit that needs “a solution imminently”.

Many people also carried placards and banners with anti-racism and anti-war messages and some in support of refugees.

National organiser Ramona McCartney said the protest was an attempt to “take back the political space taken up by Brexit”.