An extended Traveller family, with 28 children including toddlers, are to be evicted from a site in west Dublin on Friday by South Dublin County Council, which says it has no duty of care towards them. Video: Kathleen Harris 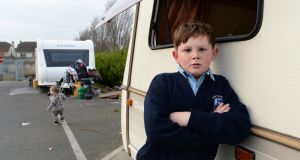 Ned McDonagh at the unofficial site at Balgaddy, Clondalkin, Dublin. The five families living there are to be evicted on Friday. Photograph: Dara Mac Dónaill / The Irish Times 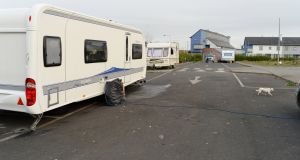 An extended Traveller family, with 28 children including toddlers, are to be evicted from a site in west Dublin on Friday by South Dublin County Council, which says it has no duty of care towards them.

The five families, who have been living in caravans on an old school site in Balgaddy, Clondalkin since late last year, say they have nowhere else to go. The council, however, says, they are there “without permission” and as they are not from the county area, it has no “duty of care” to them.

It says they have been served with valid notices to quit and that moves to “enforce the removal of this illegal encampment” before Christmas were postponed on the understanding that the families would leave by Friday.

The site has no electricity, toilets or running water. The families have come from the Dublin City Council (DCC) and Clare County Council areas due to “overcrowding” and conflict with other families, they say.

John Mongan is here with his wife, Matilda, and four children aged 14, 13, nine and four since late October. They came from Tara Lawns, a site in Coolock, due to overcrowding, rat infestation and “ups and downs” with others there, he says.

He says his father, ‘Old Pat Mongan’, lived on a Traveller site in Balgaddy, his family was from the area originally and his children are now enrolled in “school just across the road”.

“This was all the time the place we called home,” he says. “Now the council wants us to be gone. We have nowhere to go. We’ll have to pitch up somewhere else I suppose, and be moved on again.”

Tara Lawns, a decommissioned Traveller site, was badly damaged due to feuding between Traveller families about a decade ago. Families left at the time and, with no further feuding, it is now stable.

Ten families live in the 10 bays there though others have come and gone over the years. Despite commitments by DCC to refurbish it, it remains in considerable disrepair.

Patrick and Bernadette McDonagh, parents of five children aged between nine and 15, have also come from Tara Lawns. They left in October due to ongoing dilapidation and rat infestation. They too say they have family connections with Clondalkin and cannot return to Tara Lawns.

Other families who did not wish to speak to media are understood to have come from Co Clare, one having left Tara Lawns 18 months ago. Another also came from Co Clare having been in England, according to a senior council source.

Mr McDonagh said SDCC told the families “two or three days after we pulled in, that we had to go”.

“We said we weren’t hurting nobody here, that no one would get hassle from us here. It is very hard living like this. The situation is very poor. The caravans are so cold at night you have to wear your coat to bed. We’ve nowhere at all to go. We’d be grateful for a bit of help.”

The number of Traveller families living on unauthorised sites has increased by two-thirds in recent years, from 361 in 2013 to 585 in 2017 (the latest data available), as family units increase and the delivery of Traveller accommodation falls below commitments made by local authorities.

Bernard Joyce, director of the Irish Traveller Movement, who has been advocating for the families, called for greater co-ordination between local authorities where Traveller families leave one and find themselves homeless in another. He said greater consideration should be given to the immediate housing needs of families, particularly those with young children, than to “coming down hard” in enforcing “the letter of the law”.

A spokesman for SDCC said the council was obliged “to meet the accommodation needs of the county’s indigenous Traveller community . . . The families concerned are not from the county.”

“They left Tara Lawns voluntarily and their former accommodation has been allocated.”