The Dublin Chinese New Year Festival programme has been launched and runs from 1 – 13 February. 2019 celebrates The Year of the Earth Pig, which represents overall good fortune wealth and prosperity. Video: Bryan O’Brien 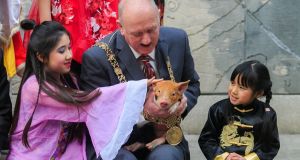 Dragons, pigs and people dressed in traditional Chinese clothing descended on Temple Bar on Tuesday afternoon to launch the Dublin Chinese New Year Festival for 2019 which coincides with the 40th anniversary of diplomatic relations between Ireland and China.

Chinese people worldwide, including almost 18,000 Chinese citizens living in Ireland, will celebrate the year of the pig in 2019.

Members of the Chinese community in Ireland expressed their delight at the growth of the celebrations in recent years.

Dario Dai, originally from Fujian Province in southeast China who moved to Ireland more than 15 years ago and now owns a pizza restaurant in Newbridge, Co Kildare, said: “Chinese New Year is getting bigger and bigger in Ireland, which is great. It is very, very important to Chinese people – it’s just like Christmas for Irish people. It is a time for family.”

Angela Chun Zhu Wang, an art lecturer at UCD’s Confucius Institute from Shenyang city near Beijing who has lived in Ireland since 2001, said: “When I came in 2001, not many people knew about Chinese New Year. And now when I meet my friends they often ask what [zodiac] animal it is this year.”

“I’ve found that the Irish government and the Irish people are more likely to celebrate Chinese New Year now. Everybody knows what it is,” she added.

She also commented on China’s growing presence in international affairs and said she is “very proud that China is getting stronger and stronger”. “China has opened the door to the world now”, she said.

This year also marks a number of important anniversaries for China and its relationship with Ireland.

“So the coming year, the year of the pig, in China’s tradition and culture is the year of prosperity, stability and security. This year we are going to expect that new and greater achievements will be obtained between Dublin and Beijing and between China and Ireland,” said Mr Yue.

Dublin Lord Mayor Nial Ring said the festival was “a great opportunity for Dublin people to see more of what the Chinese people have to offer our city as it becomes more cosmopolitan”.

“It’s a unique way of seeing other cultures. The Chinese have a wonderful culture. You can see here the colourfulness and the carnival atmosphere. I just want to make sure that everyone in Dublin can share in that.”

Mr Ring, who held one of the piglets on his lap at the launch and briefly put his chain of office around it, added jokingly: “Some people might say the Lord Mayor is a pig. The little pig was allowed wear the chain of office for a while. I think it’s only five days old and has already reached great heights in Dublin. It took me 59 years to get to here.”

Organisers of the Dublin festival, which will run from February 1st to February 17th, have said this year’s festival will be “the largest and most spectacular programme to date”.

“This will be the 12th edition of the festival and also the year where we celebrate the 12th zodiac animal, the pig. We are coming full circle so it’s a very exciting year for us,” said the festival producer Aimée van Wylick.

The festival will include more than 80 events across the city in February such as workshops in dumpling making, calligraphy and Chinese flower arrangements along with other events such as film screenings and lectures.