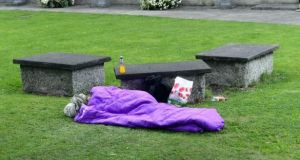 The latest homeless data showed a reduction from 9,807 in February, to 9,681 in March

A fourth local authority has confirmed it removed families from its March homelessness figures, who remain in accommodation funded from its homelessness budget, at the request of Minister for Housing Eoghan Murphy.

Limerick City and County Council removed 24 families from its figures between February and March, all of whom remain in a family hub at Childers Road. It has been open since last year, operated by Focus Ireland.

Focus Ireland says the facility is still a family hub and the families there are still homeless, though there is a long-term plan to convert the apartments into permanent homes.

A spokesman for the council told The Irish Times: “In March 2018 there were 68 families in emergency accommodation in Limerick. Last month, this number was reduced to 44 families due to the transitioning of the Childers Road Family Initiative into long-term accommodation . . . It consists of 30 apartments and became operational in December 2017 with a view to assisting families experiencing crisis accommodation issues.

“It was always planned . . . [it] would transition to permanent accommodation in due course. This process is currently under way and we are working with the families involved.”

Mike Allen, director of advocacy with Focus Ireland, said: “Our understanding with Limerick council has always been that these units will eventually become long-term homes but the families should continue to be included in the homeless figures until this actually happens.

“The timing of the transition should reflect the continued need for temporary emergency accommodation in the area and the interests of the families, including the need to establish a strong community.”

In the past week Dublin City Council, Waterford City and County and Louth County Council, confirmed removing families from its homelessness figures, at the request of the Minister, and that the families remain in homelessness accommodation.

The department said it had established that several local authorities had “miscategorised” 247 adults and 331 children as homeless and consequently these were deducted from the March figures.