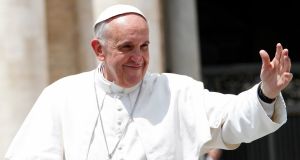 Br Kevin Crowley said: “The pope is coming especially to see the homeless people, and the mothers and children. That’s the most important thing.”

Pope Francis is set to visit a homeless shelter during his two-day visit to the Republic in August.

Br Kevin Crowley of the Capuchin Day Centre told RTÉ News it had received confirmation from the Vatican that the pope will visit on August 25th.

“The pope is coming especially to see the homeless people, and the mothers and children,” he said. That’s the most important thing. Secondly, I think everywhere the pope goes he makes sure to make contact with the homeless and poor people.

“It’s a great honour and privilege for the homeless people here that Pope Francis is giving some of his time to visit the centre. Of course, we’re all very excited and proud of this great event which is taking place in August.

“It will be a big event for the families. Many of them are coming in here every day and going into hotels.

Br Crowley said he did not believe Pope Francis was aware of the scale of the housing crisis, but that he would be informed on his arrival.

“I’m sure that during his visit here he’ll be made aware of it,” he said. “I hope that his visit here and the awareness of it will be taken up by the Government.”

In terms of security, he said officials from the Vatican and the Garda had visited the centre.

“We had a visit about a month ago, and another visit again about two days ago,” he said. “So I think all guns are going, and everything seems to be falling into place. We also had visits from the Garda, which will also be very involved in organising the event.”