CervicalCheck: Ministers ‘not informed of delays in telling women’

John Connaghan, Interim Director General of the HSE has apologised to all those affected by the cervical cancer scandal and also to "all the women of Ireland who have been frightened and concerned by what they have read and they have heard". 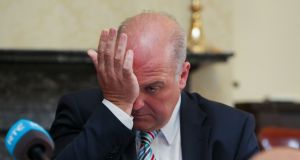 No Ministers were informed about delays in telling women the results of cervical cancer screening audits, the Department of Health chief medical officer has said.

Dr Tony Holohan who told the Oireachtas health committee yesterday that ministers were not informed said the decision not to escalate the issue further up the line was “reasonable and fair”.

It emerged last month that at least 162 women with cervical cancer had not been informed about audit findings showing they had previously had false negative smear test results. Of a total of 209 women who could have had earlier intervention if the initial smear tests results had not been false, 18 have died.

The secretary general of the Department of Health Jim Breslin said the approach of the department when it received details of the cervical cancer screening audits in 2016 was reasonable based on the information available at the time. The Department had been told in memos dating from that time that while legal advice was being sought before letters were dispatched to the patients’ treating clinicians the plan was that patients would ultimately be told.

He said that a major concern would have been triggered if the widespread non-disclosure of audit findings to women had been escalated by CervicalCheck within the HSE and raised with the Department.

He said in such a scenario a much different attitude would have been adopted. “But, based upon the information we had, we viewed the initiative taken to communicate audit findings to women in a positive light.”

HSE national director of health and wellbeing Stephanie O’Keeffe, whose division was in charge of screening services at the time, said the screening programme always intended that women would be informed of the results of their audit findings.

However she said that all the mechanisms had failed.

She said it was always expected that legal cases would arise when information on audit findings was shared.

Ms O’Keeffe said she had not expected that the women would not be informed of the audit findings.

“I received a management report every month from the screening service telling me the audit process was going well and improvements were being made to the programme.”

She said that in about May or June (in 2017) there were indications that one or two legal cases had been referred to the State claims Agency. That reinforced to her that the “process was working”, she said.

“None of the usual assurance mechanisms that you would have as a national director and a senior manager told me there was a difficulty between the letters being issued and the communication to patients.”

Ms O’Keeffe said it was clear to her that there was correspondence within the system in 2017 when she was in charge that she did not know about it.

“It was not escalated to me,” she said.

“I can provide assurance that the Department was not aware of these issues until this controversy arose. We have since had the opportunity to engage directly with a view to understanding, directing and investigating what happened.

“So let me spell it out clearly; firstly, no Minister was advised. Secondly, the decision not to escalate was a fair and reasonable decision. It was reasonable because the information provided in the briefing notes provided by the HSE to the Department was evidence of ongoing improvement to how the service was being delivered, rather than the identification of a problem which, of its nature, required escalation to Ministerial level. The HSE has and will confirm that within their systems no escalation of concern in relation to the implementation of this audit programme took place.”

The new interim HSE chief John Connaghan said if there was a requirement to hold individuals to account personally arising from the cervical screening controversy, it would happen.

He apologised on behalf of the HSE and the CervicalCheck programme to all those directly affected and to women in general across Ireland who he said were “understandably frightened and concerned by what they have read and heard”.

He told the Oireachtas health committee that the HSE would learn lessons from the events of recent weeks “ not least the ability to say sorry”.