Over 5,000 people gathered on the streets of Dublin to support the “black lives matter” movement in the wake of protests in the Unites States over the death of George Floyd. Video: Karl Hayden/Dara Dara Mac Dónaill/Sorcha Pollak 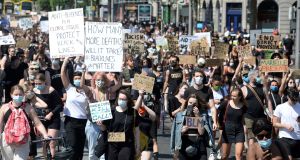 More than 5,000 people gathered on the streets of Dublin on Monday afternoon protesting the death of George Floyd and chanting “black lives matter”.

The crowds marched under clear blue skies from the GPO on O’Connell Street to the American embassy in Ballsbridge in solidarity with the Black Lives Matter movement and following the death of 46-year-old George Floyd, who died last week after being arrested by police outside a shop in Minneapolis in the United States. Cities across the US have been rocked by protests over the death in recent days.

Monday’s demonstration in Dublin was attended predominantly by young people aged 16-30, with hundreds carrying signs calling for an end to racism, an end to direct provision and in solidarity with the Black Lives Matter campaign.

Lawson Mpame (27) from Castleknock, who walked at the head of the protest, said he felt “frustrated and angry” by Mr Floyd’s death and that he was “sick of the injustice” towards black people around the world.

Many Irish people still refuse to accept racism is a problem in this country, he said.

“They think we’re just making it up but I’ve experienced it at first hand, my family has experienced it and my friends too. We want people to listen to us and understand the frustrations we go through.

“Being black in Ireland should mean being part of the Irish community but sometimes we feel like we’re not actually part of this community. It feels like we’re second-class citizens and we don’t have the same rights as you guys. That has to change and that needs to start now.”

Judy Ehiguese (25) and her sister Tessy (23), originally from Nigeria but both living in Lucan, said there was “silent racism” in Ireland.

“It’s not spoken about here because it’s not as serious as what you see in America where people are shot or killed,” said Judy. “It hides in the bushes and the trees here; it’s silent.”

Sarah Jane Goulding, who took part in the protest with her 9-month-old daughter Tamia, broke into tears as she relayed the racism her daughter experienced before she was born.

“I can’t have that for her when she’s growing up. A five-year-old doesn’t deserve to come home crying to their mams asking why do they say I’m not pretty? My daughter is black, my friends are black, and they don’t deserve to be judged because of their skin colour or their hair or ethnicity.”

Katja Ntidendereza from Dublin said watching the footage of Mr Floyd’s death made her think of her father and brother. “My dad has such a gentle soul and to think that someone would look at him and perceive him as violent from the colour of his skin is absolutely outrageous. We’re protesting here for George Floyd but also for every black person who has gone through discrimination.”

Ms Ntidendereza says many Irish people are “completely ignorant of the racism in this country”.

“Growing up in Ireland, going to school here, being the only black person in the room so many times, the looks you get, the perception, people name calling, that’s racism. I would definitely say to Irish people that your casual racism – the pub talk, the building site talk – is not acceptable and it can have such a huge impact on black lives.”

Ms Ntidendereza called on the Taoiseach to address the issue of racism in Ireland and to call out the discrimination many black-Irish people suffer. “There’s such a huge diverse population in Ireland. Show people of colour that you support them and support them out loud.”

Monday’s demonstration came to a halt outside the American embassy where thousands chanted Mr Floyd’s name. While some participants left space between each other while walking through the city centre, there was very little social distancing among those gathered outside the embassy.

It’s not clear who organised the protest but word of the event seems to have rapidly spread online in recent days with a poster advertising a “socially distanced protest” appearing on numerous social media platforms.

This reporter attempted to gauge the number of attendees and stood on Baggot Street for 15 minutes counting passers-by but struggled to ascertain an overall figure. However, attendance was well over 5,000.

A Garda spokeswoman said the force no longer comments on numbers participating in protests.