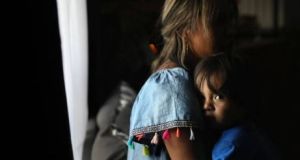 “Without a Minister for children at the Cabinet table we’re concerned that the recovery will be too focused on the economy and not on those most vulnerable and most need of support. The needs of children and young people cannot come last.” File photograph: Getty

Sixty children’s rights organisations have called on political parties to retain the Department of Children following reports it is to be abolished as part of plans for a coalition government.

According to media reports, the responsibilities of the Department of Children and Youth Affairs are to be split across several ministries as part of a coalition deal between Fianna Fáil and Fine Gael.

The expected move has prompted the 60 members of the Children’s Rights Alliance to call for the department to be retained in its current form.

“We are deeply concerned about reports that the Department of Children and Youth Affairs may be carved up in the next government,” said Tanya Ward, chief executive of the Children’s Rights Alliance. “We have been in this position before. We know that when responsibility and accountability are fragmented between departments, so too are the services and supports for children and young people.

“Without a Minister for children at the Cabinet table we’re concerned that the recovery will be too focused on the economy and not on those most vulnerable and most need of support. The needs of children and young people cannot come last,” she said.

The organisations,including Barnardos and ISPCC Childline, have written to all the parties involved in government-formation talks to retain the department.

“This is a red-line issue for us and our members,” Ms Ward said.