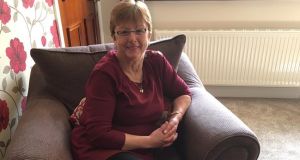 Penny Fitzpatrick, who owns and runs a 10-bedroom bed and breakfast on Inis Mór.

The “multiple layers of uncertainty” faced by people who have lost their jobs due to the Covid-19 pandemic are revealed in a study just under way.

Conducted by Dr Amie Lajoie, senior researcher with Tasc, the “think tank for action on social change”, the study is gathering experiences from people across the labour force.

It is “imperative”, she says, “the experiences of workers are integrated in policy and practice both now and after the pandemic emergency”.

Ten of the first interviews shared with The Irish Times show a range of experiences from small business-owners struggling to stay afloat to workers experiencing difficulties with employers and private landlords, or, in some cases, the State when it comes to accessing the Covid-19 unemployment benefit.

The people are aged between 23 and 64 and include students, people in managerial positions, a waitress, a barista, a restaurant owner and a returned emigrant working in event management.

One of the participants is Penny Fitzpatrick (64), who owns and runs a 10-bedroom bed and breakfast on Inis Mór, Co Galway.

Her business, Tigh Fitz, operates between February and October. “We make hay when the sun shines,” she says.

She needs a good season to pay the bills, including mortgage, insurance and ongoing maintenance, through the winter.

Her last guests arrived for a night on March 15th. All April and May bookings were cancelled, and most of the business for June and July is gone too. She has had to let her three full-time staff go, as well as a part-time worker.

“It’s the same for most other businesses on the island – everything has just stopped. The only business that’s going is the local shop. It is huge worry for everyone on the island, what’s going to happen.”

She accessed the Covid-19 pandemic unemployment benefit of €350 a week without problems, though had huge difficulty getting clarity from her bank. “I was days trying to get through and then couldn’t get a straight answer about how or whether I’d get the three-month moratorium on repayments. I got the answers eventually and I got the break, but it will still all have to be paid.”

The Taoiseach’s address last Friday, indicating tourism could restart in mid-August, cheered her. “We hope people won’t be afraid to travel. I don’t think we’ll see too many from overseas. I think we will be depending on the Paddies this year to visit us.”

Other interviewees have been given pseudonyms. “Emma” (27) returned from Australia at Christmas and started a job as an events co-ordinator in Cork in February. She was let go on March 6th.

“They were really nice about it. They were going to pay me for an additional week [until March 13th] and we were all in tears and they said they’d have me back in a heartbeat and they felt really bad that they had dragged me there.”

She had a “mad hullabaloo getting access to the Covid payment” due to confusion as to whether she finished work on the March 6th or 13th, and was initially put on jobseeker’s allowance of €203 a week.

“I rent, and all four of us in the house became unemployed and have no income coming in – we are all on social welfare.” She got a €75 reduction in her monthly rent.

“Anthony” (31) a fitness facilities manager in Galway, was “very disappointed” with how he and colleagues were laid off.

“We were told by a first email that came out on that Thursday [March 12th] in the middle of the day and then by Friday morning [March 13th], we were sent a second email: ‘We’re closing today . . . nobody gets paid a cent after today.’”

Accessing the Covid-19 benefit was “a bit of an ordeal”. He has savings, but they were for his wedding. He is worried about the future of his industry.

All interviewees thought the Government was handling the pandemic well.

“This collection reveals how policies that concentrate solely on the importance of having a job, rather than what the job provides, are inadequate,” says Dr Lajoie. A job does not necessarily guarantee security, she says. “This is especially true in the face of unexpected events or shocks, as the current crisis has shown.”