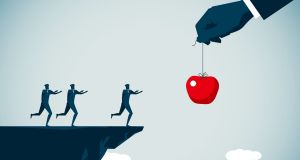 Some extremely wealthy people never seem happy with what they have, always wanting more. Power and wealth play havoc with all of us. Illustration: iStock

Temptation. The word evokes myriad opinions, feelings, thoughts and memories in our heads. Those of us old enough to remember the terror of hearing about the many ways the devil had for tempting us have spent our lives trying to banish such thoughts. The devil and his fire, his long forked-like iron bar scared the living daylights out of thousands of small children. No wonder we don’t want to know of him these days. Was that the idea, to scare the living daylights out of us? If we showed such images to small children today, their parents would be up in arms. And rightly so, too.

Back in the 1980s I often heard stories about an elderly priest, who at every conversation would interrupt the flow of talk to tell the assembled group that the devil was under the table. The devil is in the detail. He’s always a nasty piece of work.

I think we can agree that temptation plays a significant part in all our lives. Whether it’s to smoke or not, to drink alcohol, to eat too much sugary food, to drive a motorbike too fast, to slander someone, we all know what it means to be tempted. We all know that human beings are capable of extraordinary goodness, but we also know we are all capable of doing great harm and evil. Oscar Wilde amused many when he said he could resist anything except temptation. Wilde’s clever wordplay often contains a nugget of wisdom.

And then there are grades of goodness and badness. We turn the perpetrators of great evil into monsters so as to disassociate them from human beings like us. Every day’s news, national and international, brings us face to face with acts of good and evil deeds. You might say it’s the way of the world.

Tomorrow is the first Sunday in Lent. In the Gospel (Mt 4: 1-11) we read the well-known story of Jesus being led by the Spirit into the wilderness to be tempted by the devil. While the devil tries his tricks on Jesus, Jesus tells him where to go. There is a long-held tradition that Lent is an opportune time to arm ourselves against the ways and temptations of the devil. Lent is a good time to do battle with our own egos. In the days before Ash Wednesday I was talking to a psychologist. We were discussing how it is so easy for our egos to run riot with us. She gave examples of how extremely wealthy people never seem happy with what they have, always wanting more. Power and wealth play havoc with all of us.

Some days earlier I spotted in a national newspaper the death of a man. I recognised his name. Some years ago, he resigned from an organisation after details emerged of how monies had been misappropriated. The report of the man’s death carried his photograph. The newspaper report, and all that it entailed, evoked in me a terrible sense of loneliness, sadness and emptiness. Looking at the bigger picture it was an illustration of the pointlessness of chasing rainbows.

Soon afterwards there was another report of ill-gotten gains. This one had a funny side to it. A millionaire drug-dealer who managed to accumulate over €53 million lost the codes to his bitcoin accounts. He carefully hid the account numbers in his fishing rod, which in turn was either lost or stolen. Without the codes, his access to the money is gone. You might call it rough justice.

Every time we give in to our egos, we start down a road that does nothing for us or those who are close to us, or indeed, society as a whole.

Christianity offers us a great story about good and evil. Sometimes it’s a literal explanation, at other times it might be metaphorical. But it is always the same story, advising, admonishing us to stay away from wrongdoing, not to allow ourselves to be tempted to do what’s not good for us, for our family, for our society.

Lent gives us an opportunity to think about where we stand regarding our – at times – all-conquering egos. It’s a good time to tell our egos that we are in charge and not they. And there’s a place too for a healthy understanding of the role guilt can play in our lives. But most of all we need to reassure ourselves of the love that God has for us. God is love.